I spent the weekend in Toronto, as my earlier posts have said. This is actually the second time I have been to the city, and the longest stay so far. The last time I was in Toronto was back in November 2008, when a friend of mine and I did a daytrip, so that we could walk around the city and eat dimsum in Chinatown. This time, however, I spent more time by actually staying there for two nights.

Overall, I am impressed. I am impressed with the amount of multiculturalism that pervades the scene. I am amazed at the amount of Little [insert country name here] that can be found in the city. Of course, there's Little Italy and Chinatown, but there's also Little Brazil, Little Portugal, even Little Tibet, where I got my awesome Tibetan dumplings. Neon signs in Tamil and Sinhala are found in the city, and people are just proud of their heritage.

This is not to say that ethnic populations are not found in other cities like New York, but I think various ethnicities mix better in Toronto than in New York. In New York City, it feels a totally different country when you're in Dominican land, because the other populations don't even go there. It's like it feels dangerous to be an outsider in these little ethnic enclaves in New York, but Toronto doesn't have that feel.

I also noticed that Canadians have a distinct look to their attire. I can't place my finger on it in particular, but they have a look that one can definitely guess that they're Canadian. People there remind me of that movie Scott Pilgrim, for some reason.

All in all, I enjoyed the city, and wished that I had more time than what I actually had. It's really a slice of the world, and I liked that. It's not a melting pot, where everyone seems to get neutralized to some common denominator. Instead, it's a showcase of every continent, with people preserving who they are: Indians and Caucasians hold concerts of Indian classical music, and people flock to Chinatown to eat dimsum, even the non-Chinese.

Toronto's awesome. It definitely feels like the center of the universe. 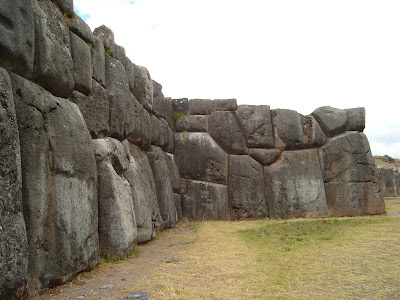 (Stone Walls, from my Saqsayhuaman Series)