The Catholic Church Should Fuck Off

So I have come across a rather disturbing article in the news lately, about the Catholic Church threatening excommunication to Philippine President Aquino if he decides to provide contraceptives to poor families who would want artificial birth control.

How silly is that?

The Roman Catholic Church in the Philippines is actually threatening to excommunicate President Aquino if he chooses to advocate artificial birth control methods. Wow.

This actually reminds me of Henry VIII, and how the Church of England was formed.

Why does it make my stomach turn when I read of these things? Really, the President should just tell the Church to fuck off. The Church has no business meddling with politics and social policy. Artificial birth control as abortion? Right. If the Church does not want to provide artificial birth control to the poor, then why don't they help the finances of the poor and alleviate them of their dire situation? It is so pathetic that the Catholic Church is so dogmatic about these matters that they hold the masses imprisoned, chained like a domestic animal, dictating social policy like that. Just because the Church says so, then it becomes true.

Oh world, for once, use your brains and think. Don't let the bishops think for you. Unfortunately, that is not the case, and the church is exploiting that. The church would rather have a burgeoning population of poor masses than advocate something that would actually control the population boom and lift the masses up from poverty.

One would wonder what the hell these bishops are smoking. Either they're smoking something I am not, or the church is just a big jackass. 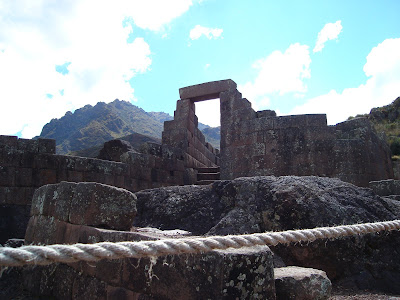 (The Altar Entrance, from my Pisac Series)