Competition and the Level Playing Field

I figured I blog about this topic. I have been thinking about the topic of the human playing field, as to whether it is equal and level for everyone or not. Together with some comments from the previous entry, and my ruminations on this topic with other friends, I figured I write something about it.

So, the main question is, do all humans enter the world equal or not?

One variation of this is whether one believes in the theory of the tabula rasa: this is also known as the blank slate theory, where one believes that humans are all "created" equal: thus, all of our knowledge is the product of our perception and experience, that is individually shaped. This is the nurture side of the "nature versus nurture" debate: in other facets of human experience, this reflects in the belief that certain aspects of our personality and behavior are not due to innate specifications but due to the collective experience that we have accumulated.

However, as I gained experience in teaching, I realized that not everyone can be good at anything. There may be the possibility that people are good in some aspects more than others. One's talents can be collected in one aspect, but not in the rest. One can be a great mathematician yet suck in playing a musical instrument. If this is the case, then the blank slate theory may fall.

Fine. So let's look at something else. IQ.

Not everyone is born with the same IQ. Yes, intelligence can be the product of hard work, and I am not questioning that. But people can be born with inherent congenital birth defects, and these can drastically reduce the potential of the person, if this birth defect has a cognitive component. People can be born with an extra chromosome, and that results in Down's Syndrome. That reduces the intelligence of the person. Now with this case, I think it would be hard to argue that this is cultural: I don't think one can reason that Down's Syndrome is due to the prenatal cultural experience.

I guess I should tie this to my previous post. I still believe that humans are inherently selfish, but what I don't understand is the stigma that people attach to selfishness. No, this is not something that is bad or negative. I guess this is the result of the mass indoctrination that religion has done to the human race: that humans should strive to be good and love one's neighbor. I think "love" for one's neighbor is also accounted for by the selfishness principle: if one doesn't "love" one's neighbor and simply attacks the next person, that will be reason for this person to be caught by the law, and I presume selfishness and its derivatives would not want the result of that, thus acting as a deterrent. But I guess that is topic for yet another blog post. 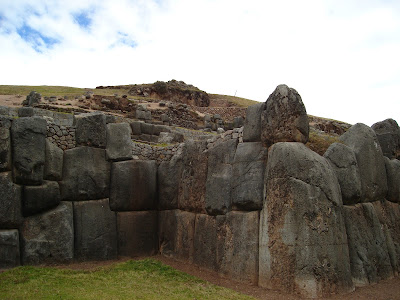 (Giant Corners, from my Saqsayhuaman Series)