The other day, we watched a movie entitled Delicatessen. This is a French movie that was made back in 1991, and it is a black comedy. Overall, I enjoyed it for several reasons, and so if people have the chance to watch it, go for it.

I guess this is a movie that allowed me to appreciate the beauty of movie-making, without the aid of grandiose special effects. It is set somewhere in France in a post-apocalyptic time, where people eat other people to survive. The characters are all inhabitants of a tenement, and they advertise vacancies to prospective tenants, which they chop up later. Corn bits serve as currency.

The characters are also bizarre, yet wonderfully done. There is a lady who hears voices, and wants to commit suicide, with low success. There's also a man who lives with frogs and snails. There's also an old woman who knits only for her finished product to be untied and rolled again into a ball of yarn.

And yes, there's the three main characters, the butcher, his daughter, and the former clown who falls in love to his daughter and yet is the butcher's next victim.

I don't want to give away how everything ends, but the thing I like in this movie was that the story progression wasn't predictable at all. It was a very engaging movie, and so I always was kept guessing with respect to what will happen next. So if you get a chance to watch this, go for it. 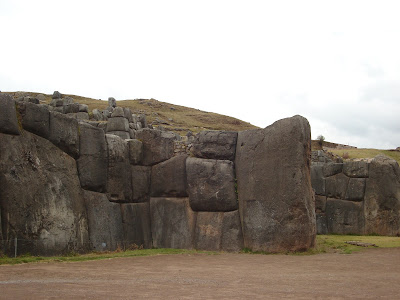 (Criss-Crossed Walls, from my Saqsayhuaman Series)