It's times like these when I tell myself that I need to speed up on my research and graduate faster. It's Halloween, and people's common sense just goes out the window.

Earlier today (or rather, Friday), I saw the students in the Student Union, and apparently, there's a haunted house in the student union. And students were lining up to enter it. And once inside, I hear people screaming and laughing and screaming and laughing. Wow. You're already in your twenties, and yet you're still enjoying this? Not that I find anything wrong with it, but I just feel this disconnect and cognitive dissonance between the university as this sacred place of learning where the halls and corridors are witness to the advancement of the humanities and sciences, and yet right smack in the middle of it is this haunted house.

I am writing this post in the middle of the night, and it's already past 1:00 AM. I guess it didn't help that I had Turkish coffee as accompaniment to my dinner (there was an out-of-town guest in the department, and we took him to dinner, and to my surprise, the department paid for my dinner so that was cool). We went to a Lebanese restaurant, and the food and conversation was good.

Anyway, I cannot sleep. But I think the reason for this is less due to the Turkish coffee but more due to the fact that I live in the area of the city that has plenty of students, and there are students that are dressed up in weird costumes just walking up and down my street, and they obviously are drunk, and shouting. Some of them are dressed in bedsheets, some of them are dressed more elaborately. I saw a chain gang get out of a taxicab. There's also Elvis.

So yeah, it's a weird and crazy night. But I should try and get some sleep, as tomorrow, or rather later today, should be a fun day for an excursion. Stay tuned. 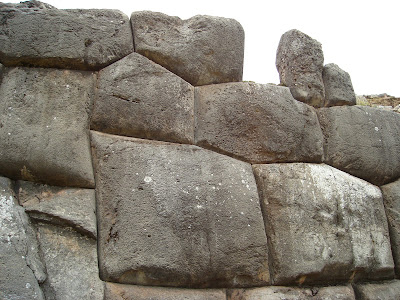 (Close-Up, from my Saqsayhuaman Series)