I Was Quoted/On Religion and its Function

I just realized recently that I was quoted in an article in cyberspace. I didn't realize that what I say in my blog is actually picked up and cited. But, there you go.

It is funny how the reactions to this survey spanned the whole spectrum. Some religious believers said that this quiz misses the point, and that what is important is what is in the heart and not in the head. What is important here I think is the realization that being an atheist or agnostic does not mean that one doesn't care about this topic. I care a lot about this topic, in fact. And it's the believers most of the time who don't care. In fact, I remember the days when I still belonged to a religion, and we went out to preach, and we would ask people why they believe the religion they have, and most if not all, would respond that it is because that was how they were brought up. Period.

I watched the latest episode of Glee recently. It was touching on the issue of religion and acceptance. What I found interesting is that the show tries to be inclusive as much as possible: there's Jewish characters, Baptist characters, Catholic characters, and atheist characters. Straight and gay, Asian and white, disabled, and so on.

However, what was more interesting was the function of religion and how it was displayed in the show. One of the characters' father had a heart attack, and so people turned to religion for comfort. However, this character (Kurt) is gay and is also an atheist, and was rather not receptive of this reaction from his fellow classmates.

So what's the function of religion, per this show's portrayal? Religion is a source of comfort, since it seems that this world is too cruel to face alone, and God would be the source of support to navigate this world. The world presents plenty of challenges that one simply cannot face if there is no such thing as a heavenly support. Religion is also an explanation, because God apparently works in mysterious ways. Things seem to have a cause-and-effect, or at least a correlation, and God seems to be the most logical explanation. Religion also provides hope, because there are things we want in life and yet we seem to have no control over it, so we just hope that God listens to our prayers and answers them.

I guess that is reason enough for people to believe. In that case, I respect their position. Unfortunately, it is not reason enough for me. I am content with the life I got right now, if I die tomorrow or in 2052, that's fine. I recognize the fact that there are plenty of things to do in this world, but I don't try to do them all, as I know my limitations.

Also, I know the fact that bad things happen. Bad things that we don't want, and that we just don't have in our control. However, that is precisely what chaos theory is. There are things that are unexpected, no matter how structured we want our life to be. One can die in a car crash tomorrow, or the airplane that one is in might be hijacked and brought down. For every action we do in this world, there is an associated risk, and that is just something that we cannot take out of the equation. One simply can accept it, and no amount of praying to a supernatural entity will remove that risk.

Anyway, I guess the utopian world would be that everyone would have each belief, and people will just learn to accept them. Because, everyone's constraints are different from the next person, one simply cannot expect that one's important thing is also the next person's important thing. It is when people are intolerant of others that bad things happen. 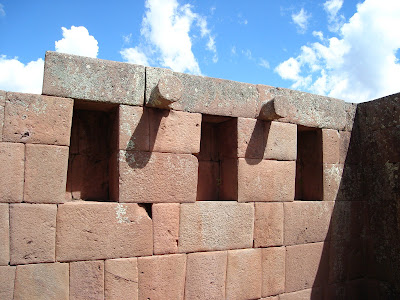 (Interior Walls, from my Pisac Series)