So I am back in Buffalo after spending a weekend in Toronto. There were plenty of awesome things to do in Toronto, it's such an awesome city that I actually enjoyed myself and feel the desire to come back. However, that's for a different post.

Anyway, last Saturday night, I attended a small concert of classical Indian music. My good friend invited me to attend, and since I had no data point about Indian classical music at all, I wholeheartedly agreed. And it turned out that all of my assumptions about music and recitals were toppled away.

So the sitar is one interesting instrument. There are several strings, but they are all located on one side of the neck. I later learned that it was because the players pull those strings to the right and that creates the marvelous microtones that Indian classical music is famous for. This is something that a Western keyboard simply cannot produce.

Another thing that I found interesting was the way the recital was conducted. At first, it seemed that the performer was just tuning his instrument. And somehow, tuning became performing. So tuning apparently is part of the performance. First, he did some scales, and then he did variations on the scales. Everything apparently was improvisation, and the players just relied on counting how many beats one cycle of improvisations would be. It reminded me of Western style theme and variations.

Of course, this performance had the audience on their knees sitting at the floor. I found it interesting that the audience groaned and sighed every time the sitar strings were stretched to its maximum capability. They also sighed and groaned whenever the tabla and the sitar both came at the same beat. I guess the tabla and the sitar players control all the impromptu improvs and they just count how many beats they are away from the beat that they should come together.

All in all, it was a very fascinating evening. 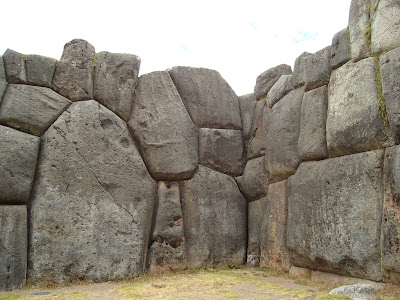 (Huge Stones, from my Saqsayhuaman Series)