Sometimes, there are things that we do just because it breaks the rhythm of the things we usually do day in and day out. So yesterday, it was International Suit Up Day, and so everyone in the department agreed that we should all wear suits. All graduate students, at least. And there was a good turn out, a lot of us were wearing suits that the faculty somehow got confused, and wondered whether they were in the right department, or whether we all decided to imitate the students from the Law School or the Business School.

Anyway, I wore a blue suit with a matching bright orange shirt. And a tie that had both orange and blue.

In the end, it was funny. It was a fun way of breaking the rhythm.

In another metaphorical sense of suiting up, I realized at how much I suck at writing. This has something to do with writing something that is academic. It also has something to do with writing something for a layperson but has power on you. I am trying to have an IRB protocol cleared, and before I submit it for review, I was told by my adviser to have it get looked at by the lab director first, who also is a member of my committee. And boy, sitting down with her for an hour was very much eye-opening. I ended up realizing that the way I write puts too much burden on the reader, assuming that they know the knowledge that I have, and using so much jargon that the reader would have a hard time understanding it if this reader was not coming from the same background as I am. In the end, I was told to aim for the lowest common denominator: I should assume that I am writing for my mother, who is presumably intelligent, and yet does not have an idea what I am working with. My adviser told me the same thing a while ago, that I should write for my dentist, who is presumably intelligent, but does not share the same specialty as me. I need to improve on that.

Anyway, that's that. The weather here is getting crappy. It has been raining for the past couple of days, and I kinda do not like it, because winter is not here yet, and already the sky looks glum. The sky should suit up, as they say. I don't like seeing grey skies in October, knowing full well that this would be the norm when February comes. 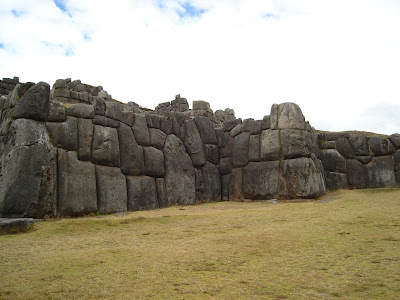 (Giant Boulders, from my Saqsayhuaman Series)