Walking Over to Canada

Yesterday, I spent the whole day in my office, working. I typed my IRB protocol, and hopefully that was good enough so I can submit it to the reviewers soon so I can conduct my dissertation experiments. I already gave a copy to my adviser to review and comment on; I'll just wait for his feedback before I submit it.

But, at around 3:00, we got bored. We were there since early, since around 9:00 AM, and we were getting antsy for being in one place at the whole time we were there. So, an idea popped into my head, what if we do something different? What if we walk over to Canada?

We thought that was a good idea, so we went home, and grabbed our passports. Thirty minutes later, we were walking the Rainbow Bridge in Niagara Falls. It's a good thing that the US-Canadian border is just ten minutes away.

So we had our passports, and the Canadian officer asked us what we were doing in Canada, and so we responded that we just want to see the Niagara Falls from the Canadian side. How long will we be in there? Just about an hour or two. Are we bringing anything to Canada? Some cash and an umbrella. So I got another stamp in my passport.

And then we walked over. Wow. This was actually the first time I saw the Niagara Falls from the Canadian side. And yes, it's prettier. Way prettier. Unfortunately, I didn't bring my camera, since it was a spontaneous thing, and the weather was overcast anyway.

After an hour of watching the falls, we crossed back to the American side, and there was another border patrol. That was easy.

So looking back, apparently, this is the third time I walked to a new country. The first was when I entered the Vatican City from Italy. That wasn't too much of an impact, as there isn't a border, just a museum entrance. The second time was when we crossed from Hungary to Slovakia, and given the fact that both countries have a common border, there was no passport control. We just crossed the Danube and there were big flags everywhere, and our cell phone providers immediately kicked in roaming. So this third time indeed had a big impact, as I got another passport stamp! 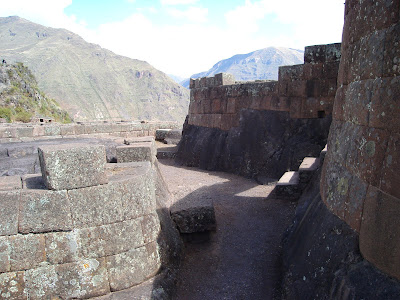 (Curved Corridor, from my Pisac Series)