So for the past weekend, I have been in Toronto. It’s a little interesting in the sense that perhaps this is the first time that people from various different aspects of my life have somehow intersected and was in one place at one time.

So, first of all, Toronto is where a very very very good friend of mine lives. He and his significant other basically belongs to my blog circle: we met a couple of years ago through reading each other’s blogs. Actually, we got to know each other because both of us were reading Zhu’s blog and since we found each other’s blogs interesting, we decided to just continue and read, until one day, circumstances happened such that there was an opportunity to meet in person. I think that was around September 2009 (remember the “Ax Murderer?”).

Second of all, my sister and I met up in Toronto. She actually got to know the ax murderer through social networking, and somehow decided that we should meet up in Toronto for the holiday weekend. The ax murderer was hospitable enough to let the two of us stay in his apartment, so my sister decided to get there by Tuesday, while I had work that I cannot be there until Thursday.

Finally, another friend of mine decided to drive up for the day last Saturday to Toronto, and so we met up as well. This friend belongs to my university circle, since he is a graduate student in my department as well.

I dunno, but I think this world is getting smaller and smaller now. We are creating a vast web of social connections, and some of them can be transitory, but some can be quite strong. It’s not the case anymore when people just never left their own village, and they stayed there for their whole lives People move around now, and there are more and more relationships that are formed with various people and faces.

The thing is, as much as how amazing that thought is, it is also in need of effort as well. Relationships and friendships aren’t static; they come and go, and it is up to both parties to keep it warm and going, so to speak. Everyone has to make an effort to keep friends so that they won’t fade and disappear and vanish into thin air. And with today’s mobile world, friends can be everywhere in the planet.

I have a friend who is from Belgium who happens to be living in Japan right now. It used to be the case that he was living in the United Kingdom, but due to the fact that he has a Japanese wife, they decided to move to Japan for the time being. When was the last time I personally saw him? That was back in 1999, when we were both in high school together in Japan. I was living there and he happened to be an exchange student. Surprisingly enough, we still keep in touch. Emails fly back and forth at a rate of about once every 2 months, and that’s enough to keep things updated. The fact that there’s 14 time zones between Buffalo and Gifu makes meeting hard, but there’s modern technology to circumvent that problem.

I used to think that building friends and relationships are pointless, given the fact that I lead a fairly mobile lifestyle. I grew up in a family who moved a lot, due to the fact that my dad works for the diplomatic corps. It was hard making friends when I was little, because I thought that it would be pointless, because I knew that I was supposed to live in one place only for 6 years and then pack up and leave. In short, I hate saying goodbyes.

But then I realized later that that wasn’t the most ideal situation. I accepted that I move a lot, and that cannot be a hindrance. After all, humans are social beings, and what’s wrong with making friends along the way? Which is why I suppose I take every moment I can to hang out and spend time with loved ones and friends while I still can. I have only met the ax murderer a few times, and yet he seems to be someone who I don’t feel like I need my guard up. It’s rare to find people like that. So since I know that my days here in Buffalo are numbered, I don’t mind going up to Toronto once in a while to see him and hang out while I still can. I suppose that’s just a consequence of the fact that modern life is much more mobile than before, but one makes do with whatever resources one has to preserve relationships and human connections that people build naturally. 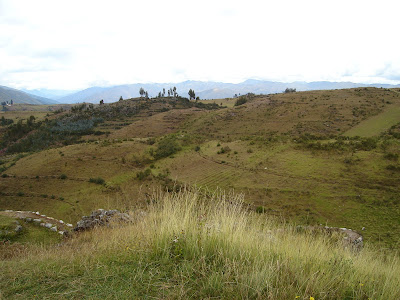 (The Expansive Plain, from my Pukapukara Series)