If you are living in the United States and fly, chances are you have heard of the new procedures for screening with respect to airport security. And unfortunately, it is not a pretty sight.

First of all, they have now introduced the naked scanner. This is unlike other metal detectors in that it produces an image of you without your clothes. It basically scans the skin. And yes, it can store pictures and they can be pretty graphic too. Not only does it score points against privacy, it also is government-sanctioned pornography. And I haven't mentioned the amount of radiation this thing has.

So, what happens if you don't want to go through the naked scanner? There's the government-sanctioned fondling. This article explains what one can expect when getting a pat-down. The following are quotes from what has been reported by fliers so far.

* Agents patting your genital area through your clothing;

* Agents rubbing and squeezing your arms, back, stomach, buttocks, and breasts with open hands through your clothing. Screeners often run their fingers along the underwire of women's bras;

* Agents running their fingers through your hair and the area around your neck and the collar of your shirt;

* Agents running their fingers several inches down the waistband of your pants or skirt, often involving touching and/or exposing your bare stomach.

* Agents performing these searches in full view of other, gawking passengers, without informing travelers of their right to be screened in private;

* Agents touching your genitals through your clothing with shocking and even painful force;

* Agents pressing between the cheeks of your buttocks through your clothing;

* Agents repeatedly touching the same parts of your body, for no apparent reason;

* Agents with demeanors that range from embarrassed or apologetic, to coldly professional, to aggressive and hostile, to creepy;

* Being delayed and forced to wait for extended periods of time;

Unfortunately, I don't have power in this country to make a change. But hopefully enough people will rally against this that the Department of Homeland Security fixes this and changes it to something more palatable. Thus, with the upcoming holiday season, I wish everyone good luck and enjoy being gate-raped; unfortunately, this is now a government-sanctioned activity. 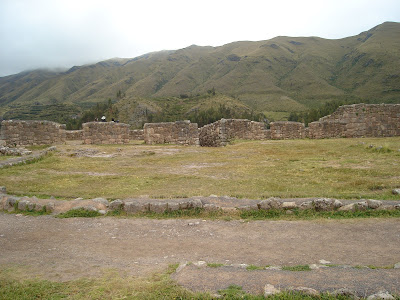 (Stone Rows, from my Pukapukara Series)