The other day, I was in a bar with several friends. One of them had a visitor, a rather special visitor. And due to the fact that this was not a usual occurrence, there was a new data point at the table.

Anyway, I noticed that my one friend and the visitor was rather close to each other, I mean, physically close to each other. And to some degree, I felt uncomfortable. I mean, I have no problem with being physically intimate, but I don't think a relationship is performance art. That is something where I always draw the line: my romance and its derivatives are not for public access. Romance and its derivatives are a form of shared information, and not allowing the rest of the world access to it makes it more valued, and elevates the prestige that its derivatives have. Thus, physical intimacy for me isn't appropriate in a public setting, such as a bar or restaurant, not because of prescribed rules of public behavior, but because it is valued information that I would only want to share with the person I am romantically involved with.

So, when I saw one of my friends becoming a little physical with my friend's significant other, I felt uncomfortable. Not because I thought they were violating some public social more, but because I felt that I did not need to see that. That was information that I did not want to be privy to. 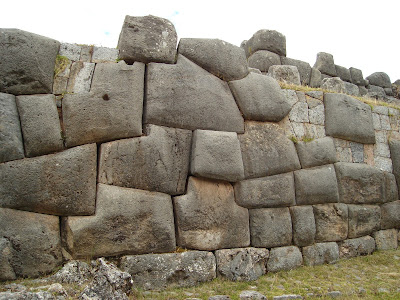 (No Cement, from my Saqsayhuaman Series)