So my first dissertation experiment was concluded, and from the initial looks of it, it seems that I have the numbers that I want. In other words, the results follow the predictions I had before the experiment was conducted.

I won't go into details regarding the experiment, since in order to protect my personal research interests, I would rather keep them to myself first until I get to publish them. However, I could be somehow happy that the numbers were what I want. Now, all I need to do is find a second person to do the annotation as well, so that no one can tell me that I biased the results myself. I should get another person to do what I did with the data, and then I will be measuring inter-rater reliability between my counts and the other rater's counts and see whether there's reliable results across raters. I will be doing this using the Cohen's Kappa statistic.

Anyway, there was one result that I failed to predict. The predicted results were there, but there was another one that I didn't see coming. It's not a big deal, and I could totally come up with a reasonable story as to why that is the case, but I didn't predict the result before running the experiment. I made a comment on this to my adviser and he said that that is the difference between doing science and doing theology.

When one does science, there's room for surprise. And here, we were surprised, because there was a result that we didn't predict, but occurred, in addition to the results that we predicted. The thing with science is that things can be falsified, simply by conducting an experiment. The experiment can either verify one's hypothesis, or falsify it. Or, as in this case, the experiment can give a result that is totally out of the blue.

In the case of theology, falsification isn't an option. It seems that there is no room for surprise. One doesn't bump into a theologian who says, "Oh wow, I didn't realize there are two Gods!" That scenario just doesn't happen.

I guess this is just a minute observation, but perhaps this shows how I value science in a small scale. These little surprises, these little tests, and the apprehension that comes before it, I thrive in this. As much as I put a lot of effort in designing my experiments, and extrapolating what the results would be before I would even run it, I still get the apprehensive feeling before an experiment is conducted, because part of me still doesn't believe that I would get the result that I want. What if the result that I observe is the product of chance? Chaos? Total randomness? Is it replicable? Thus, before I run an experiment, I make sure that all the holes are sealed, and every possible problem is given a solution, so that when the experiment runs, things would go smoothly, and I would have a story to tell. 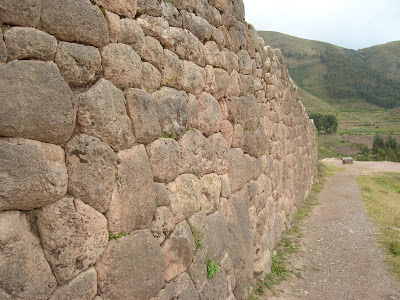 (The Walls Stretch Far, from my Pukapukara Series)