So the two experiments that I have been running this past week have concluded. I am glad. I have tons of data points to look at, analyze, and average, and I am now working on that. I just coded about 1728 sentences and phrases into an electronic format, since one of the two experiments were done on a paper-and-pencil format. It's tiring, but at least I am enjoying it. From time to time, I would see a funny result, and it just provides me with a little comic relief.

Anyway, the other experiment also concluded, but before it did, there was a rather bizarre incident. I had a participant, who I shall say, gave me some headache. Well, first of all, this participant decided to postpone the experiment first, and then when this participant finally came in, it seems that the participant does not understand what the task was about.

Anyway, I decided to be civil and calm, but inside I was fuming. I felt like I was being patronized. It felt like I was treated like a curious monkey, who landed on the shores of the United States for the very first time, who was asked why I am here, and when I reply that I am here to study, I am told, "Good for you. Welcome to our country." Deep inside, I thought "Wow. You think I am a novelty? That's what happens when your own country doesn't produce enough bright minds, that bright minds from other countries come in and take their spot."

So, I suppose that incident just proves that data out there is messy. Data is not always clean and dandy, and there are always outliers. For my other experiment, I think I am re-running them with a different set of instructions, because that way the data would be cleaner.

And yes, I am a foreigner. I am grateful that the American educational system has provided me an opportunity to study and further my education. But I don't need to be talked down to. I understand what you're saying, so you don't need to pronounce every syllable twice as long and twice as loud. I am not an idiot, just so you know. 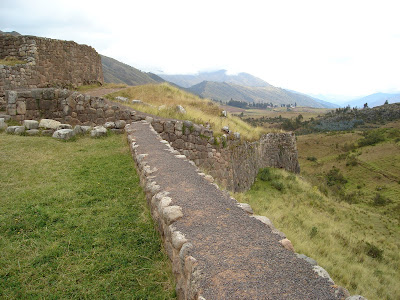 (Stone Edges, from my Pukapukara Series)