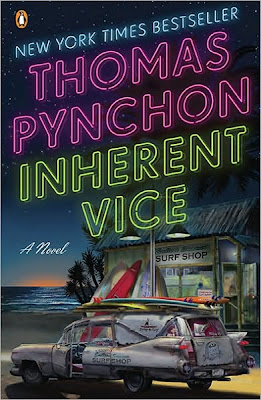 I would say at the outset that this is a negative review. As much as I was looking forward to reading this book, in the end, I feel like it was a let-down.

First, the requisite synopsis. This book tells the story of a private investigator under the name of Larry "Doc" Sportello, who is approached by a client one day because someone disappeared. He starts investigating, and then he finds out that there is a grand scheme involving some secretive group that is called The Golden Fang, the LAPD, and hired assassins. The novel is set in 1969-1970, where hippie culture was thriving, and the main character is a hippie himself. His arch-enemy is this Swedish-American police, Bigfoot Bjornsen. The whole novel is about a cat-and-mouse chase between Sportello and multitudes of other characters around Los Angeles, even in Las Vegas. And among the things that people encounter are weed, cigarettes, heroin, prostitutes, and so forth. In short, this is some weird psychological noir novel. If you want a better synopsis, go to the Wikipedia article and you'll understand better.

Now, why did I not like this? Well, partly because last August, I read V. by the same author, and I loved it. I loved the fact that V. was a post-modern novel, and it was such an enjoyable read. I loved how multiple components of the novel were tied to the symbolic title, even the architectural design of the plot was symbolic. That happened to be Pynchon's first novel, published in 1963. Inherent Vice on the other hand, is his latest novel, published just last year. And somehow, it felt like the authors were different. It didn't feel like a novel that was written by the same author as V.. I was disappointed.

The whole novel was just a movie, I just sat back and relaxed, and followed the adventures of Doc Sportello as he was framed by people, as he was led into a chase, as he was captured and almost died. It wasn't mentally engaging like the previous book, and in short, it felt like I just read an airport novel, devoid of any hint of profoundness nor philosophy. I should say it would probably be a good movie if someone decided to write a screenplay for it: it'll be a crime action movie. But somehow I was expecting more than that.

Ah, too bad. It's funny, but the inside cover mentioned that this was experimental fiction. The only part I found experimental in this novel was the weird drug-induced passages that described the main character's out-of-body experiences. In short, I would probably pick another Pynchon novel, but I'd select one of his other earlier works. I give this one 2 out of 5 stars. 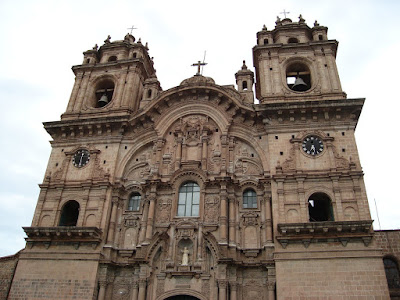 (Church Facade, from my Cusco Series)