I recently found this BBC article about whether people should add their parents on Facebook. It used to be the case that the Internet was just the domain of the younger generation: the generation that grew up on video games and cellular phones, but the generation before that didn't even have a regular email address that actually was functioning, and so forth. As an anecdotal factoid, I find it amusing to watch my mom type on the keyboard, because she only uses one finger to type anything. That makes it a very painful and slow process.

However, the times have changed, and even the more senior generation have caught up in the technology game. The parents of the 20-somethings now have Facebook accounts, and they use it. In fact, this rather interesting cognitively dissonant effect was used in this interesting commercial from the Philippines.

Anyway, so back to what I was saying. This new development in the social realm and the effects of the Internet made people face a new dilemma: do they need to "friend" their parents?

The thing is, there are people who do, and there are people who don't. Personally, I don't want to. Personally, my activities in the cyberspace are real, and are part of who I am. I am one of those people who only have a handful of people that are friends in Facebook. The last time I checked, I only have about 60-something friends, and these are people who really know me. It used to be the case that I had friended people who I just met at a conference. Then I also had friended some people who I went to high school with back in the days. But then I later realized that they're not my friends, really. Why do they need to see my pictures, and know what I was thinking at a given time? The people that I met in a conference, they could always search for me using my professional website, and I don't need Facebook to network. And my high school classmates? Well, friendships are dynamic. I might have been friends with them back then, but things change and life goes on. Friendships come and go, and if I or they didn't do any effort to keep the friendship warm and on-going, then they'll fade and vanish. I don't need them to still keep track of what I am doing.

So what is Facebook for me? It's my little cyber corner. Only some people have access to it. My parents don't, and I am fine with that. Some people on the other hand are fine with letting their parents see their drunk photos, and so forth. Not that I have those, but still, I think everyone needs a little corner of privacy, and just because one is related to oneself by virtue of blood doesn't mean that every aspect of one's life is already open-access to the other person. 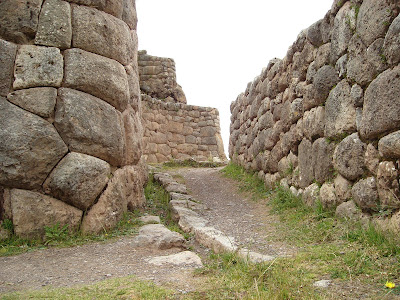 (Old Footsteps, from my Pukapukara Series)