Why is it that people seem to be incompetent nowadays? Whether it's in the news at the national level, or even at the personal level, people can be incompetent at times, and guess what? There are repercussions, mostly along the lines of other people being inconvenienced, and the sad thing is that sometimes, that person who is inconvenienced turns out to be me.

Just look at this story. A loaded gun apparently is missed by the TSA and gets included in the luggage of someone for an international flight. Now, that is just silly, especially after all these installations that the TSA has been using for "security". They have the naked scanner where they can take pictures of our naked bodies using some high-tech X-ray, or they can do the gate-rape, where they sexually assault you in public in front of other passengers. And yet when there's a loaded gun in someone's hand luggage, they don't catch it. How incompetent.

And then there's the professional realm as well. I was supposed to be involved in a conference that is going to happen next month. I was supposed to be doing something else aside from just being second author in a talk. However, due to someone's incompetence, things changed, and I need to do something extra which is a hassle. When in fact it was never my fault to begin with. At first, they lost some email of mine, and then as a strike two, they lost me in the system completely. How is that professional?

Oh well, shit happens, but when it does, it really is shit. One would hope that after several years of professional existence, things would have been perfect already, but no, teething issues apparently still occur. And it kinda sucks when I'm the one that bears the brunt of this. 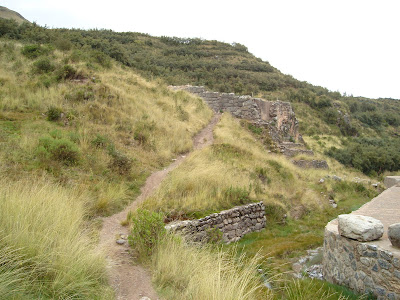 (A Trail Through Sacred Land, from my Tambomachay Series)