Tonight was the concert for the UB Contemporary Ensemble. And for tonight, they were showcasing the music of contemporary composer Frederic Rzewski.

So, I always enjoy watching to two ensembles here in UB: the UB Percussion Ensemble, where they did the John Cage concert a few days ago; and the UB Contemporary Ensemble. They always play music that I have never heard of before. And tonight was no exception.

So first of all, I haven't heard of Frederic Rzewski at all. Later on, I checked Wikipedia and apparently, he is not some obscure composer, but a real figure in contemporary classical music. The five pieces that they played tonight was quite interesting.

First, there was the Trio from 1956. This was composed of trumpet, flute, and piano. I had a hard time characterizing this piece, primarily because it was mostly rhythmic and no captivating melody stood out. This was followed by To The Earth, which is scored for one person, who played flowerpots in addition to singing, or rather, saying something, in a weird tone sequence. She was perhaps reciting a poem, which was rather bizarrely amusing. I haven't seen anything like that before, although perhaps it reminded me of Peter and the Wolf by Prokofiev.

The last piece they played before the intermission was Les Moutons de Panurge, which consisted of several instruments, and there was this very arrthymic melody that was repeated over and over again by several instruments. It gradually changed as the music progressed. The fourth piece was The Fall of the Empire, and this was again scored for one female performer, playing seed pod rattle, vibraphone, drums, and chime, and she had to recite some interesting passages as well. Oh, and the radio was playing as well.

Finally, the piece Attica was performed, perhaps inspired by the Attica Prison Riots around the same time. There were performers on the stage, and performers within the audience, and a performer that was hidden from view. It was very contemporary. And I presume that if someone was used to the traditional idea of classical music, this would be very different and difficult to digest.

All in all, I loved the performance, and I love the fact that I get this opportunity to be introduced to music that I haven't heard before. I had a great time. And the best thing is that the concert was free! 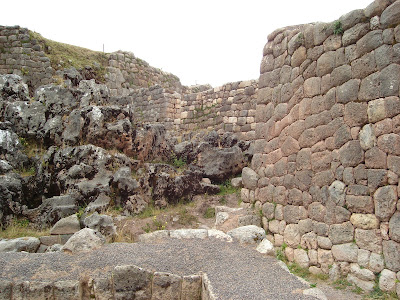 (Rocky Maze, from my Pukapukara Series)