Ah! Yesterday, I finally finished grading my students' final exams. It's been a brutal three days.

It started last Tuesday, when they took the exam in the afternoon. After the test, I immediately set to work, sitting down and checking off the first two problem sets (there were 6 all in all). The first two problem sets were easy, since the questions only had one correct answer, and if they wrote something else, that would be considered a mistake. I finished those on Tuesday.

I finished the whole pile yesterday (Thursday). It was great. Finally, I tallied the numbers, and assigned letter grades for them. There were a few people who were failing the final exam.

I rewarded myself by buying a slab of nice moldy St. Agur Blue Cheese. And breakfast today was wonderful. 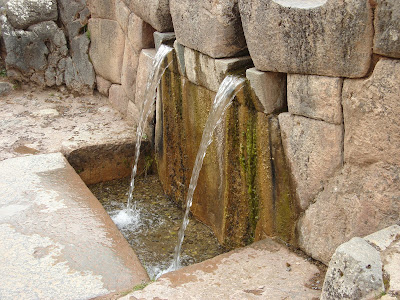 (Sacred Water, from my Tambomachay Series)