Perhaps today is the day when the semester has finally ended for me. There were several things that basically marked the end of it.

Second, I am in the middle of moving my office. I am moving to the Dissertation Office, and with that, I have moved stuff of mine that needs to be there. I also have some stuff that I don't really need, so those will go home with me. I have realized that I need to start embracing the electronic system of information transmission: I saw all the papers that I have printed, and they were crazy. I should restrict myself to printing just the papers that I really need to read and the ones that are relevant but not as much will just be relegated to electronic PDF copies.

Third, I finished my bottle of Voyageur. I got this bottle back in 1997, and it has been with me for 13 years. Finally, it's about time. It's a small bottle, only 50 ml but I didn't have it with me all this time, since when I moved to Buffalo, I didn't bring it with me. Only when my sister visited the Philippines early this year did I had the chance to get it back again. So yes, the bottle went to trash, and starting tomorrow, I will be wearing another cologne that I have for a while, which is none other than Havana by Aramis.

Finally, speaking of events, one other event that was rather noteworthy was the fact that yesterday was the day when I tried three weird food items. I tried Tibetan bhod-jha, which is some sort of tea, but it tastes like melted butter mixed with saltwater. I also tried spicy beef tripe, which was interesting to eat. Finally, I tried a deep-fried Mars bar, and that was surprisingly good. 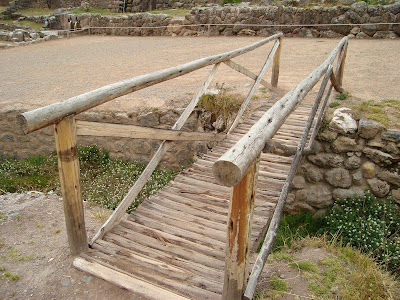 (Footbridge, from my Tambomachay Series)