Yesterday, we watched a movie entitled Peacock. It was a psychological thriller, and since that was a favorite genre of mine, I was looking forward to watching it.

It stars Cillian Murphy, who is the Irish actor known for giving chameleonic performances. I saw a couple of his other films before, such as Batman Begins where he plays the Scarecrow, and more importantly, Breakfast on Pluto, where he plays a transgender character whose name was Patrick but preferred being called Kitten. The reason why this is relevant is because in Breakfast in Pluto and Peacock, Cillian Murphy had played female characters despite him being a male.

And I have to admit, Cillian makes for a very attractive female, although I prefer Emma Skillpa to Kitten.

Anyway, Peacock is one amazing movie. Cillian plays John Skillpa, who happens to have dissociative identity disorder, and his alter ego is Emma Skillpa. It's all a secret but one day, when there is a train accident that happens in his backyard, the small town of Peacock gets to know of Emma's existence, thinking that it was John's wife. And the story begins.

This movie perhaps in my opinion had all the good trappings of a psychological thriller. It kept me on the edge of my seat the whole time, because I never knew what was going to happen next. There was a systematic simulacrum in the mind of John Skillpa, and everything worked. The audience is always left hanging as to what will happen next in John/Emma's mind. I also liked the camerawork, since the movie had full of subtle hints that actually meant a lot. One example was the mother's room, when the first time the main character entered it, the camera made it a point to show that the dresser (and the rest of the room) was dirty, since when the main character's fingers brushed against it, there was a clear contrast due to the dirt, suggesting that the room hasn't been opened in a while (I won't give away why). The next time the main character enters the room, it was clean, and that meant a lot.

I also liked the fact that there was an alternate ending, although I think I prefer the first ending better than the alternate ending. I won't say what it is, so I won't spoil it. Anyway, I loved that movie, and I am glad that I was able to watch it. Cillian Murphy makes a good psychological thriller, and his switches between John and Emma are so superb that one would think they were being played by two different actors. He was so convincing in playing a person with dissociative identity disorder. 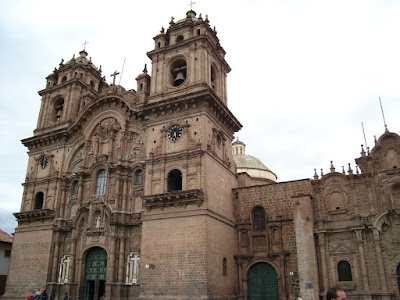 (Church of La Compania, from my Cusco Series)