Sometimes, when my academic work gets a little tedious and frustrating, I sometimes let my mind wander. Now when it comes to where it wanders, it usually wanders to ideas about travel, about trips I want to take in the future, and so forth. It doesn't help that I religiously watch The Amazing Race, and I gawk at the various sights and scenes that are featured there, and it also doesn't help that I have Lonely Planet bookmarked in my browser.

Anyway, a thought occurred to me the other day, that it seems that whenever I travel, I don't typically pick a destination that most run-of-the-mill people pick. I don't go to London, or Paris, not that I would mind going. But it's just not the first choice that comes in my head.

See, the thing is, I see travel as a challenge. Traveling puts oneself outside of one's elements. It's like a fish out of water. And the challenge is to minimize the impact this change makes. I started traveling as much as I can in 2007, and I never picked a destination that was known for being easy. I went to spend a week in Quito, partly because the year before, my dad told me never to go to South America when I voiced my desire to visit the continent while eating in a Colombian restaurant in Prague. His default reason was that I would be kidnapped. I wanted to go to Peru that time and visit Machu Picchu, but I found that to be a little complicated (international flight, domestic flight, train, bus, and so forth). So I chose Ecuador to be a practice trip. In the end, I was armed with a guidebook and a Spanish phrasebook, and my week in Quito was wonderful.

And yes, a year later, I went to Peru, and that was magical.

Anyway, it seems to be the case that every time I talk about traveling to my friends, their first reaction would be that I will be somehow unsafe, and it's a ridiculous idea to go in the first place. I almost went to Guatemala with my sister this winter, however, due to a change in plans (I ended up planning to go to Pittsburgh instead, since I am a co-author for a talk in a large conference, and this was in conflict with Guatemala, add the fact that my sister had her schedule up in the air as well), it didn't happen. I would have loved to visit the Mayan country, and when I was planning it, my friends immediately thought I am crazy.

Perhaps it helps that I am not Caucasian, that I seem to have no trouble just picking up a phrasebook and speaking in the local language. I am not light-skinned, not white, so it's not as obvious when I am in a crowd.

The other day, I was daydreaming. I daydreamed that I was backpacking in the island of Hispaniola. Yep, the island that contains both Haiti and the Dominican Republic. As it turns out, I can go to both countries without needing a visa, and as much as Haiti gets a bad rep, there are things that are of interest. Perhaps sometime in the future.

Oh well, that's that. I am getting a vacation sometime, and it will not be an easy one. I promise, it won't be London: that's too easy. 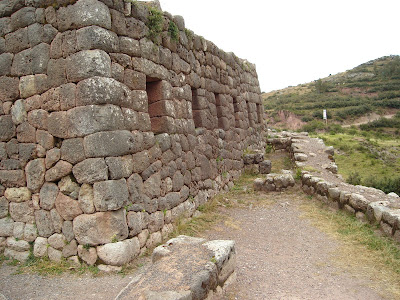 (Windows, from my Pukapukara Series)