The other day, I attended the concert for the UB Percussion Ensemble. And as always, I had a great time in the concert.

For this concert, they played four pieces that were composed by John Cage. Perhaps, John Cage is known for composing the piece entitled 4'33", which is a piece that requires the performer to do nothing for four minutes and thirty three seconds. The pieces that were performed were more rhythmic and dynamic, and yes, there's a lot of hitting.

The performers performed John Cage's Constructions, all three of them. These are pieces that needed prepared pianos, weird percussion instruments, lots of other things that people usually don't see in a classical music concert. In addition to the three Constructions, the piece entitled Three was also played, which consisted of three percussionists playing instruments of their own choosing. Among the instruments that were chosen was a vacuum hose that creates this weird twanging sound when someone whirls it, and a bowl of water that trickles producing the sound that water makes when someone pours it to a bowl.

All in all, it was a weird yet rather exciting performance. I am glad that I went, since it gives me good relaxation time that I need during the end of the semester. 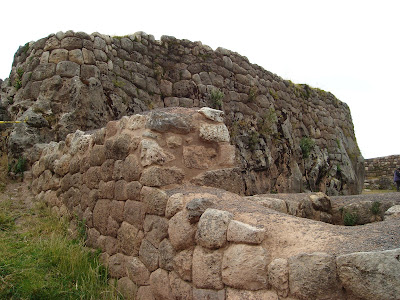 (The Citadel, from my Pukapukara Series)