The other day, I had an opportunity to taste a few wines at a time. And later on, I learned my wine preferences, since I had enough to sample. It was like a Runaway Bride moment, when Julia Robert's character realized what kind of eggs she wanted, since all along, she had just been following the likes and dislikes of her ex-boyfriends, that her own preferences just disappeared.

In my case, I cannot say that I have enough data points with respect to wine. I drink wine every now and then, but I don't do it often enough to be able to compare what I want with them.

Until now, I had this idea that I would prefer red over white, because for me, white wines just tasted sour. I hated the idea that the taste would linger in my throat, and I felt like drinking vinegar. And it seemed that whites tend to be like that than red, because even if the reds tend to be sour too, at least, they have some sort of flavor to them.

Later on I realized the spectrum between dry and sweet. And it seems that at the end of the day, I learned that I prefer dry reds and sweet whites. That's my overall conclusion.

There was a time in which some friends of mine had a wine party. Well, it wasn't really a wine party, it was just a small intimate encounter with two bottles of red wine: a full-bodied Cabernet Sauvignon and a lighter Pinot Noir. I remember preferring the Cabernet Sauvignon over the the Pinot Noir, thinking that Pinot kinda tasted like vinegar, sour, except that it was red. The Cabernet on the other hand was definitely flavored, even though it remained in the throat. 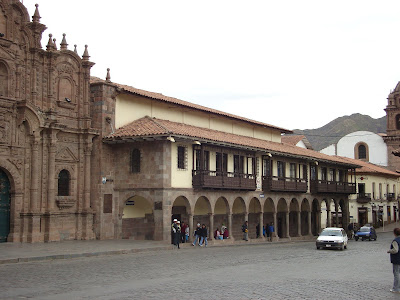 (Cobblestone Roads, from my Cusco Series)