So I am finally back from Pittsburgh. I was in the Steel City for a few days since I was attending the Annual Meeting of the Linguistic Society of America. And now I am back.

Funny, but I have been in grad school for about 5 and a half years now, and yet this is just my first time attending the LSA. The thing is the LSA isn't the most apt conference for the research interests that I have. Instead, I have been semi-regularly attending the CUNY Conference on Human Sentence Processing, which, at this point, seems to be the case that I attend it every other year. I attended it in 2008 when it was hosted by the University of North Carolina in Chapel Hill and also in 2010 when it was hosted by New York University.

However, this year, the LSA featured a talk with my name on it. So yes, there is a new thing that will get added to my CV. And it turned out to be a good event all in all. The talk was well-received, although I have to point out just for transparency that I am not the first author in this talk. I am just a collaborator.

I also met old friends who are not in Buffalo anymore, and so that was nice. It was great to catch up with old friends, and other acquaintances that might be potential collaborators in the future.

All in all, it was a good experience. Next year, it will be held in Portland, OR. If I have some results that would be presentable, I might try to submit an abstract again. 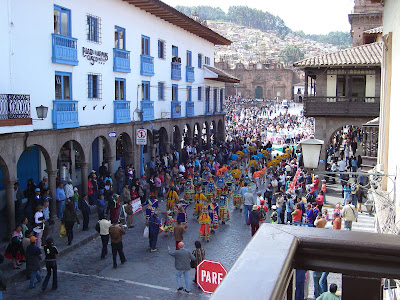 (View of the Parade While Having Lunch at a Balcony, from my Cusco Series)