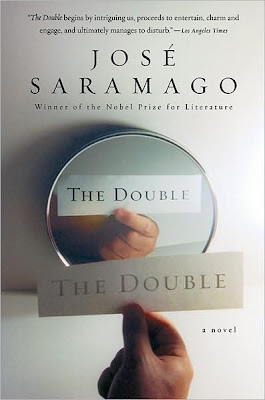 After two novels that disappointed me back to back, I decided to read something that I would be sure I would like. And with that, I picked up The Double, which is a 2001 novel by my favorite author, José Saramago. It had been sitting on my bookshelf for some time, since I borrowed it from the library a while ago, since I had the goal of reading every novel that he has published, and I figured that this would be the perfect time to read it.

So this is about a divorced history teacher, Tertuliano Maximo Afonso, who was leading a rather depressing and boring life, until one day, his colleague recommends that he should watch a movie. A title was recommended, and so he goes out and rents it, only to find out that one of the minor characters in the movie looked exactly like him.

This sends Tertuliano into a cat-and-mouse chase, an investigation, because now he is curious who this other person is. He goes ahead by watching every movie that was produced by the movie production company that was responsible for the first movie, and through a process of elimination, he finds out the name of the actor: Antonio Claro, who has the stage name Daniel Santa-Clara.

This investigative process takes a toll on his health (he gets more depressed) and his social relationships (he becomes estranged from his co-workers and his girlfriend, Maria da Paz). He decides to meet the other person, and upon doing so, chaos reigns. Antonio Claro is married, and his marriage goes down the drain due to the entrance of Tertuliano. From this point onward, the novel takes the reader to down a vicious spiral that only ends in utmost tragedy. I am not spoiling it here, but if you must, the Wikipedia article for this novel does a very good job at providing the rest of the synopsis.

Reading this was refreshing, especially after reading two bad books. It seems that Saramago's novels fall into two types: the novels with unnamed characters, and the novels with named characters. This one falls into the latter type. Unlike The Cave or Blindness, the characters here have names, and perhaps that is a necessity, because the names are all that differentiates them. Physically, both characters are the same, from the number and positions of moles that they have, the way their hair falls, even the length of their penises.

Perhaps the thing I like about Saramago's works is how it explores what-if scenarios. In Death with Interruptions, Saramago explored human folly and how it would react should death cease to happen. In Blindness, he explored how humans would adapt when suddenly, everyone becomes blind. In Seeing, the question was how humans would react if suddenly, everyone became indifferent and apathetic to the government. In this book, he explored the possible ways in which a human would react if one suddenly finds out that there exists an exact duplicate, a copy, an identical human being, someone who is more than a twin. This book explored how humans would react when the notion of uniqueness was suddenly taken away from them.

This book also featured other fictional devices that Saramago has used before. One such thing that I always find myself enjoying is the personification of non-human entities. In his other novels, animals such as dogs and elephants are portrayed as having personalities themselves, and they even have sequences of monologues. In this book, the main character has a dialogue with his conscience several times, and the conscience is treated as if it is just another human, occupying some vector in space and time. Ingenious!

Being a Saramago novel, it is heavy work for the mind, since reading paragraphs that span ten pages long is not easy. Reading it requires heavy involvement, but I always find myself enjoying every bit of it at the end. I would definitely recommend this to anyone wanting a piece of literature.

I wholeheartedly give this 5 out of 5 stars. 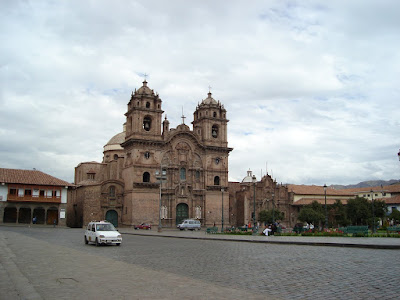 (Religion in Plaza de Armas, from my Cusco Series)