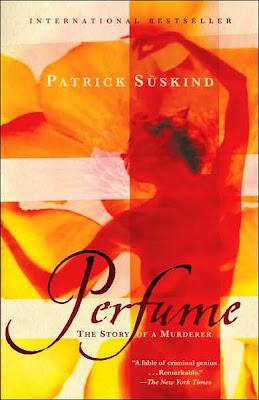 Perhaps this is one of the most beautifully-written novels I have ever read. It is one novel that is on a league of its own, and I am glad that I finally got the chance to read this, given the fact that I had watched the movie based on this novel a few months ago.

This novel is about Jean-Baptiste Grenouille, the anti-hero. If you were to suspend disbelief, then this is the only place that it will be required. He has the unusual capacity to discern smell. He can smell various different odors, and it functions the same way as bats have sonar. He can tell who are inside a room without looking in because he can smell the unique smell of each human. Throughout the book, his ultimate goal is to preserve scent, and thus he becomes a master perfumer.

Another aspect where one needs to suspend disbelief is the fact that he himself doesn't smell. He doesn't emit an odor of his own, which presents some difficulty. It's as if he doesn't exist. Thus, his solution was to make various perfumes that would imitate various human circumstances. And he's rather good at it too. He is indeed skilled at the art of scent: from imitating a competitor perfumer's cologne, to imitating the scent of a sweaty human, to even producing a perfume that would allow others to change their emotions.

Thus, the ultimate goal of Jean-Baptiste was to learn how to preserve scent. He apprenticed with Giuseppe Baldini, who taught him distillery, and also went to the town of Grasse, where he learned about enfleurage. And after acquiring these skills, he makes the ultimate perfume, and commits horrendous murders in the process.

Now, that perhaps was a crude synopsis of the book. But from a literary aspect, the book excels as well. First of all, the book has an anti-hero: we readers know that the character isn't a desirable one. However, the writer makes it like it is not the anti-hero's fault that he commits murders. He was just being Machiavellian, and that was just his own way of trying to be loved by people. The book is an exercise on morality: if one desires to be loved, to what extent would one pursue efforts so that others would love him?

I also love the way the book was written, as if it was synesthesia. The novel is about smell, and yet one cannot physically incorporate different smells into the pages of the book. However, the way the scenes were written (and translated, as it was originally written in German) made it possible for the reader to conjure all these olfactory sensations. The novel was very well-written that I felt like I myself was meandering in the stinky marketplace of 18th-century Paris, or spending 7 years in a cave in the middle of nowhere, or submitting a dead girl to enfleurage. Perhaps it makes it a little biased that I have watched the movie before reading the book, but I thought the movie was great, and yet the book was even greater than that. They have removed quite a few interesting parts from the book when they made the movie, and reading the book just made the story way better.

So, overall, I recommend this book for a seductive read. It will challenge your senses and question your standards of right or wrong. As one reads this novel, one should ask whether Jean-Baptiste Grenouille is victimizing women or is the victim himself: I for one think it is the latter. Or perhaps I was just a victim of the novel's scent. 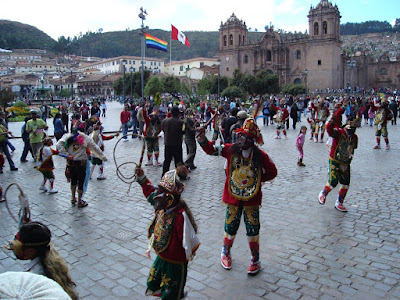 (Parading the Grotesque, from my Cusco Series)