The Evolution of my Blog

I have been renovating this blog recently, and I think I have been satisfied, at least for now. I have mentioned before that I started using the labels feature in the blog, so that there is some sort of index in here. Come to think of it, after 5 and a half years of writing, there have been a multitude of posts on various different topics, and the labels should give it some structure, and allow me and others to simply pull up some posts if I need them, instead of searching through the archives.

And after spending several hours going back to all of my more than a thousand posts and labeling them, the final label cloud has emerged. It seems that there's four big keywords, and they somehow characterize what this blog is about: grad school, personal, random, and travel.

Yes, I started this blog back in July 2005 as a way to chronicle a new chapter in my life: graduate school. I started it back in Manila, and I don't think I will be stopping until at least after I graduate. The contents of this blog is highly personal in nature, and after some thought, I realized that I have been writing this mainly for me, instead of for an audience. I needed a way to download thoughts from my head, and this was the perfect way to do it. And given that my thoughts range on a variety of things, my thoughts can be pretty random, and therefore my entries covered a range of topics. Finally, travel is something that I really love, and therefore that is also a big feature in this blog.

I realized how my entries evolved. I put labels on my posts in reverse posting order: that means that I started working on the newer posts and worked my way backwards. As I got to my posts in 2006, I realized how dumb-sounding and personal and substance-less they were, compared to my posts now. Sometimes, I got the feeling that I was posting then just in order to have something to post. I had a lot of posts that simply said what I was doing that day, it sounded more like a mundane diary instead of a blog that is actually worth reading. Slowly, however, things changed.

Before, I just mentioned briefly a book that I was reading, and put up a photo of the title cover. Nothing else. But around 2008, I started making it a dedicated post, which eventually ended up as my Book Reviews. And I also consolidated the entries where I would chronicle my trips, so that they're easy to find in one page.

I also noticed that I became more opinionated as time went by. Sometimes, I would just rant about lots of stuff, ranging from politics to religion to philosophy. I guess that is a good thing, since simply blogging about one's daily activities and writing about what happened that day is boring at times. On a grand level, I saw how the purpose of this blog evolved. In the beginning, it was what I intended it to be: a diary of the whole process of getting a PhD degree. Thus, I had a lot of posts about what classes I was taking, and what papers I was writing, and so forth. Eventually, this blog became more than that. I don't see this blog as a diary of a student in grad school anymore. Instead, this perhaps is the best thing that one can have if one wants to have access to my brain. This is a brain that is located inside a body, a brain who wants to see the world while it is in existence in this world, and at the same time, while getting a graduate degree.

So if you're reading this, I am glad that you are. Thank you for your continued patronage. 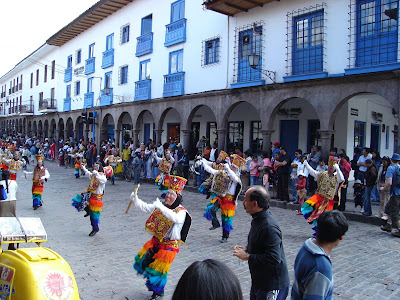 (Parading the Colorful, from my Cusco Series)