So I saw this article in the New York Times, giving people a list of 41 places to visit during 2011. And to make it easy, I'll enumerate it here for you.

Well, first of all, it is perhaps a good way of encouraging Americans to travel: it is known that American's aren't known for international travel, and that there is a significant segment of the American population who don't even have a passport. Now, yes, this is understandable. Unlike the European continent, where countries are rather small, here in the USA, states can be rather big, and the extent of travel that Americans do on roads (after all, Americans are known for the road trip) definitely counts. It's just that there are too many things to see in this continent to make other people even start of thinking about travel outside its borders.

Second, somehow, I don't understand why the African sampling is rather skewed. There's an entry for Morocco, Algeria, Tunisia, and Egypt. That's it? Oh wait, there's the lone entry for Zanzibar, which is the only African entry that is found south of the Sahara. I wonder why.

Third, as always, English-speaking entries are featured heavily. There's several local entries (which is okay), a couple of entries in Canada, and also several entries in countries such as Australia. For this, I would say that it wouldn't hurt to get a phrasebook and widen one's horizons.

Fourth, what is it with the fascination with Europe? Iceland, Poland, Turkey, Hungary? Perhaps, it is time to get out of one's comfort zone. Whatever happened to Romania? Bulgaria?

Oh wait, I forget that not everyone is an intrepid traveler. And for those that are, I guess I commend the fact that Kosovo, the Republic of Georgia, and Iraqi Kurdistan are actually listed.

So yeah, I guess it isn't as bad as I thought it was. Of course, most people fall into the normal curve, and not everyone would venture into the more challenging destinations. 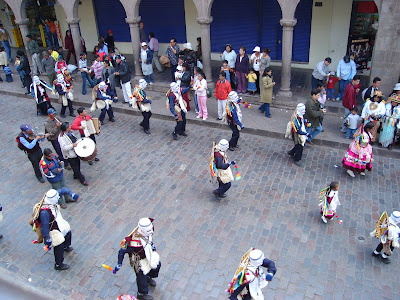 (Dancing Men, from my Cusco Series)