While I was in Mexico City, Puku and I decided to walk around interesting neighborhoods. And one such neighborhood was Coyoacán, which is located a little south of the city. For that, we had to ride the congested metro system, but as we went out of the main center of the city, the crowds thinned.

It was a Saturday, and the guidebook told us to begin in Viveros de Coyoacán, which is a public park and a nursery of the city. It was huge, and since it was a Saturday, there were plenty of people, most notably, the ones that were running in a counter-clockwise direction on the perimeter path of the park. 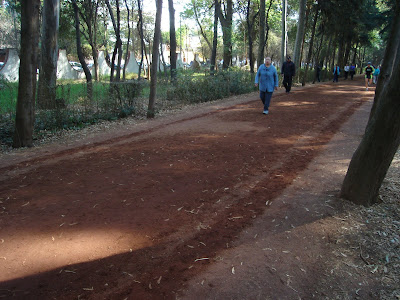 These are some of the runners/joggers/walkers that were there. They were all running counter-clockwise, and us tourists were a little off when we were walking in the opposite direction. It was quite discomforting when everyone starts looking at you like you're naked, and then you realize that that is the case since you're not doing what everyone else is doing. 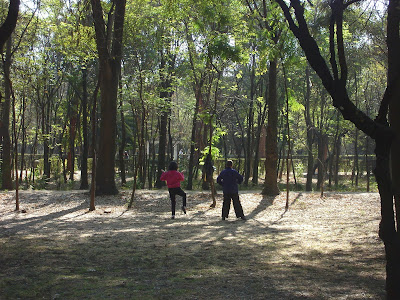 There were some interesting things that were happening in the park. People were practicing karate, judo, other types of martial arts, tai chi, and there was even a group that was practicing bullfighting. One person acted as the bull and another was swaying his red skirt around. It was quite interesting. But perhaps the most interesting aspect was the fierce squirrels. We were chased by quite a few, and unlike the squirrels here in Buffalo, these squirrels don't seem to be afraid of humans. 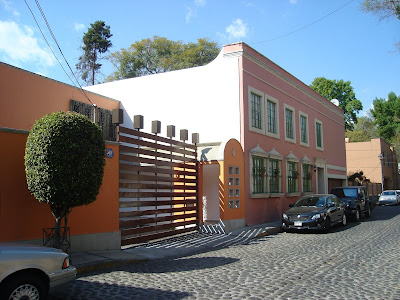 After exiting the park, we went ahead and walked towards the center of the neighborhood. One thing that immediately struck me was the artsy feel of this area of town. The streets were made of cobblestones, and the houses were painted in bright colors, as you can see in the photo above. 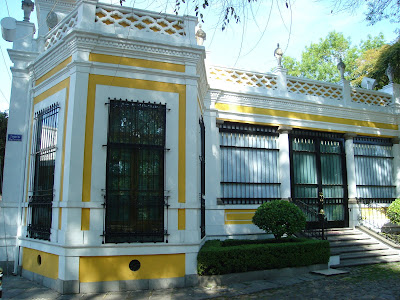 I liked the way they used colors here, unfortunately, my camera was rather old and had problems with controlling the light that I wasn't all too satisfied with my shots. The above picture is of a house that was at the mouth of the Jardin del Centenario, one of the two plazas that dominate the neighborhood, the other being Plaza Hidalgo. 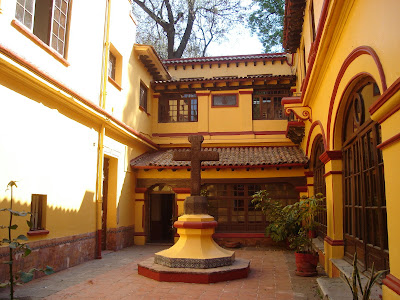 We continued walking, and we reached an old colonial house that was transformed into a cultural center. We strolled inside and marveled at the nice interior: the photo above is one of the courtyards. Again, I love how they mixed and matched the colors, it was very vibrant and alive. There were people buying tickets for plays that were to be performed in the evening, and there were groups of people practicing several types of music and dance performances. 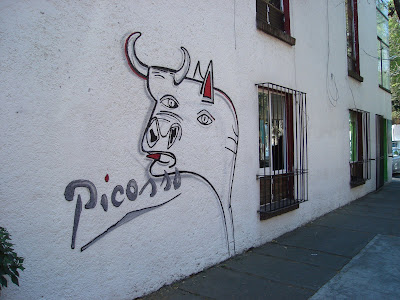 We continued walking, and somehow, we saw plenty of cameramen and large tents. Apparently, they were shooting a soap opera in town, which is why there were plenty of TV and camera crew. We walked past them, and strolled along the artsy neighborhood, which is evidenced by the Picasso-inspired wall of this establishment. 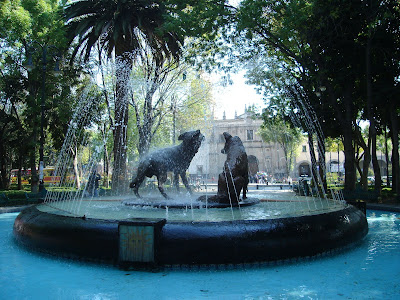 Finally, we reached the center of town, and found the coyotes, which is the symbol of the neighborhood. There were plenty of people around, and we were getting hungry. Thus, we walked over to the nearby Mercado Coyoacán to find Tostadas Coyoacán, an amazing outfit of an eatery, where you sit down, and a person gives you a piece of paper where you can check off the things you want to order, and they will give it to you in a few minutes. They make the most amazing tostadas (check out this blog entry for more details, since this blog isn't a food blog), and even the looks of it was great, that I didn't care whether Montezuma would give me a session of diarrhea or not, I would eat it. Thankfully, he didn't.