During my eight days in Mexico, I have noticed that this is a culture and society that I haven't encountered before, and to some degree, I enjoyed being among them. As I mingled among the Mexicans while I was in Mexico City and around, it felt like the blood that flows in this society is different, way different, than what I was used to so far.

Take for example the metro. Mexico City is Latin America's largest city, and with that, there is a huge swath of the population that uses the underground metro system. It takes 3 pesos (approximately 0.25 US dollars) to ride, with unlimited transfers. Here's a couple of pictures of the metro and its trains. 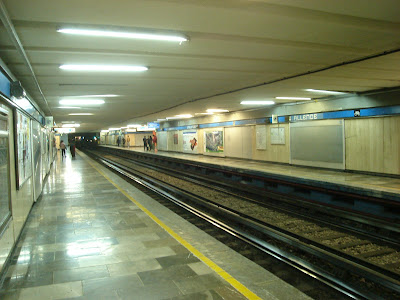 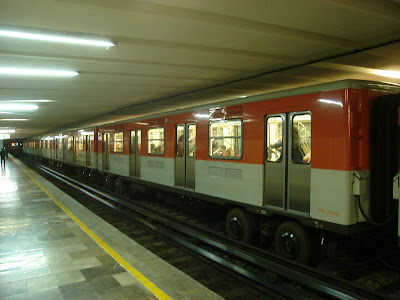 Now that looks empty, but believe me that it gets full, especially during rush hour. That was Allende Station, which was one of the two stations that was closest from my hostel. The metro system makes use of rubber-tyred metros manufactured by Michelin, similar to that of Montreal.

Anyway, I digressed. Riding the metro can be an intense experience. People and guidebooks have warned me of the dangers of pickpockets and such, and yes, I was on guard every time I rode the metro, but I was less scared and more amused due to the passengers.

While inside the trains, not a day or ride will pass without encountering someone trying to sell me things. No, they don't try to sell it to me personally, but they use the metro to advertise and shout their wares. From batteries to camera film, to chewing gum, to coloring books, what have you, they are selling it. Even CDs of classical music. It actually reminded me of my experience with the New York City Metro, where every time I would ride the A train, there would be performers who would perform for a captive audience and afterward would try to get some change from you. Looking back, I was quite annoyed by those buskers in New York City, since I simply wanted peace and quiet, but somehow I wasn't annoyed at all by the Mexico City sellers.

Oh, and when it's rush hour, good luck trying to ride the Line 3, especially between Hidalgo Station and Balderas Station. In my opinion, this is the most packed segment of the metro system that I have been to, and the train is just filled like a can of sardines. It is hardest to enter the train. You push. You push hard. You push harder. You push hard like there's no tomorrow. And then you hope that every part of you and your luggage has entered the train so that nothing is protruding out when the doors finally close. And when the doors open again, don't even try looking at the signs, just follow the flow of people, otherwise, it's a tough counter-flow battle.

The interesting thing is that even with all the people, the Mexicans don't seem to mind and life goes on. And with life comes sex life. Oh my god, the Mexicans know how to make out. Puku and I once tried counting how many couples we would see that are making out in public, and we lost count. Even in the metro, people would open their mouths and stick their tongues, as if one is giving a tongue transplant to their partner. It was just fascinating to see.

Perhaps one last thing that amused me while riding the metro system was that the underground stations function like a little community. There's shops and service stores even after one has entered the system with the ticket. There's bakeries inside, ice cream shops, lottery vendors, barbershops, and so on. And with the extensive network and long corridors where people walk in order to connect from one line to another, there can be enough shops along the way that one can do their shopping while in transit.

Yes, I rode the Mexico City metro. It was awesome, and it was lots of fun. And for USD 0.25 cents per ride, it's a pretty good deal. 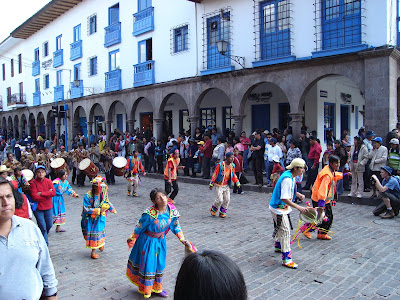 (Parading the Possessed, from my Cusco Series)