On Linguists Leading and Lagging

This past week, I attended the Annual Meeting of the Linguistic Society of America. This happens to be perhaps the most prestigious conference for linguists, at least here in the United States. And on Saturday night, I attended the Presidential Address, given by David Lightfoot, entitled "Linguists Leading and Lagging".

Basically, the main gist of the talk is that linguists have been perhaps the vanguards of research and scholarship in some areas, and because of that, linguists are known to have incredible depth of explanation. However, he also pointed out that linguists have been known to lag in some areas as well, particularly to those areas that involve interfacing with other disciplines in the academe.

It has been pointed out that interdisciplinary endeavors are in fashion nowadays, and yet linguists have been slow to take this challenge. Linguists have also been shown to be lagging in the area of education, and that linguistics tends to be not included in the mandatory education for the masses. Just a simple comparison between linguistics introductory courses in college and psychology introductory courses show that more people take psychology (as an example) than linguistics, and linguistics is virtually unknown to people outside the field.

That should be remedied, and I fully agree to that.

There are also other areas in which linguists have been shown to lag, such as in cyber infrastructure, and other technological areas. Research involving technological advancement seems to be minuscule in scale, while other disciplines have embraced it wholeheartedly.

Now I agree that more effort should be put to modernizing the field, and yet unfortunately, I see a problem where there are some of us who seem to be hesitant with respect to these modern developments.

Take corpus linguistics for example. There are already several large corpora of spoken and written language out there that linguists can potentially use in order to unravel the mysteries of language. However, there exists a school of thought within linguistics that there should be a divide between linguistic competence and linguistic performance. And because of that divide, some linguists have chosen to ignore corpus and experimental data altogether since that simply shows linguistic performance (which according to them is not worth studying) and not linguistic competence.

I don't belong to this camp, however. I see the importance of looking at behavioral data in order to reveal facts about the human language capacity. After all, I conduct psycholinguistic experiments that provide me with a mirror to what exactly is going on inside one's head. Fortunately, there are more and more people who consider this kind of data as valuable and important, and I can hope that perhaps in the near future, linguists will be able to rectify this situation and a paradigmatic shift within the field is possible. 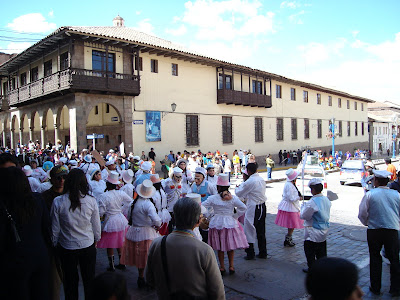 (White Women, from my Cusco Series)