The Theory of Public Displays of Affection

So I always believed that public displays of affection was never performance art. PDAs for me is a subtype of restricted information, it's one of those things that I would only want to share with the person I love. It is not something that I want the world to see. After all, why would I want a stranger to see how much I enjoy munching on someone else's tongue?

However, apparently, that is not always the popular belief around the world. I've been to other countries and saw pretty much what is in alignment with my personal beliefs. Europe was like that: I never saw rampant kissing and making out in public in Austria, Italy, Greece, the Czech Republic, Hungary, and Denmark. The people were pretty reserved. There were a few, but not a lot.

When I visited Latin America a few years ago, it was pretty much the same. Colombia, Ecuador, Peru, they didn't make out as much.

However, here in Mexico, oh my god.

The other day, Puku and I tried counting the couples we saw making out, and we gave up, because we lost count. And the way they do it, it's as if they are performing a tongue transplant. It almost made me want to tell them to just go ahead and get a room, but apparently, the Zocalo is a room for them.

Oh well, that's just one of the things that I find amusing when traveling. One gets to see things one doesn't usually see. 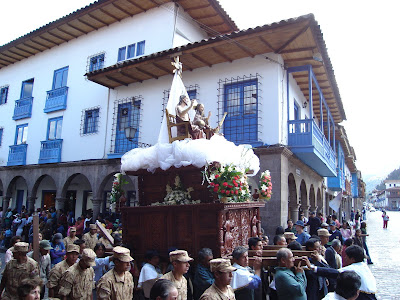 (Parading the Statue, from my Cusco Series)