Book Review: In the Absence of Men by Philippe Besson 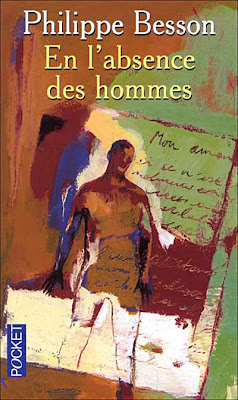 This is one of those books that makes me amazed and wonder why I decided to pick up in the first place. Because after reading it, it felt like a whirlwind piece of fiction, and it left me dazed and wondering what just happened.

Believe me, it's a good thing. I actually like this book. It's just that I rarely encounter books of this kind that when I actually read one, I get a little shocked. So what is this book about?

This tells the story of Vincent de l'Etoile, a sixteen-year-old boy of aristocratic descent, and his relationships with two people: a platonic one with Marcel Proust, who is portrayed here as a 45-year-old writer; and a romantic one with Arthur Vales, a twenty-one-year-old schoolmaster, but since it is set in World War I (the Great War, as the book calls it), he is a soldier.

The story is basically a triangle, a story that centers between Vincent and Arthur, and between Vincent and Marcel. Arthur and Marcel are also related, but I won't give that away, since that was the ultimate surprise ending. Yes, I was able to predict it, but only at the last minute, when I realized that all the math added up.

So the last time I read a piece of LGBT literature was back in May 2010, when I read Boy Culture by Matthew Rettenmund. I ended up hating that book, and so far, I don't have a data point about reading LGBT literature and liking it. This time, I think the pattern will be broken.

Perhaps, what impressed me with this book is the various literary devices that were in place. I had this idea that LGBT literature is all about superficial stories about the lives of LGBT people, arguing for acceptance from the straight world. Because until now, that's the vibe I have been getting whenever I pick up a piece of LGBT literature. However, this book on the other hand felt so different. It was psychological fiction, the characters simply loved people of the same sex. Replace one of the names with a female name and you'll get your run-of-the-mill heterosexual romantic drama. Perhaps what is most striking is the idea that the characters have real emotions too, and they are human as well, like the rest of the population. They feel, they fall in love, they get hurt.

One of the most interesting literary devices I saw in this novel was the fact that parts of it were written in the second-person narrative. There were a lot of references that started with You said... and You [verbed]..., and depending on the chapter, the second person varied. This is because the chapters that were about Vincent and Marcel were alternating with the chapters about Vincent and Arthur. I felt that this use of the second-person narrative actually made the reader (me) more involved, because the prose felt like Vincent was writing or telling the story to me, and I would fill in the role of Arthur or Marcel, depending on the chapter.

The book is divided into three parts. The first part was written in the second-person narrative as I mentioned above, which chronicled events that happened in the span of one week. At the outset, Vincent meets both Marcel and Arthur for the first time, and their relationships develop in 7 days. Vincent meets Marcel in a salon, while he meets Arthur in their estate, since Arthur has a week of leave from the army, and his mother is the governess for Vincent's family.

The second part is written in the epistolary format, since both Arthur and Marcel leave Vincent in Paris. Arthur is sent back to the trenches, and Marcel has business to do in Illiers. This part consists of letters that were sent back and forth between these three characters.

Finally, the third part is more of a conclusion, since the climactic point of the book is actually at the end of the second part, and the third part serves as a nice way of tying things together. I do not want to reveal what the climax was about, but once everything fits into place, one would just be swept away.

So, overall, I liked this book. I definitely recommend it. The story is simple and yet moving, and powerful nonetheless. I don't regret the fact that I strolled into the library looking for some piece of modern French literature (which is why I grabbed a book from the PQ shelves), since I was able to pick up this one. I give this book 5 out of 5 stars for its brilliant structure. 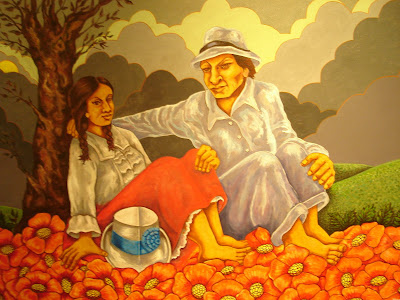 (Farmer and Girl, from my Modern Art in Cuzco Series)