Book Review: Liver by Will Self 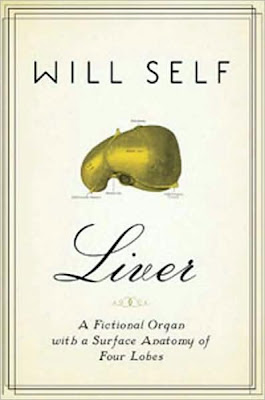 The last time I read a book by Will Self, I didn't like it. I actually gave it 1 out of 5 stars. But somehow, I find myself reaching for another book by Will Self, and decided to give him another chance. And this chance was rather interesting and intriguing, as a matter of fact.

So, instead of a novel, I picked up Liver: A Fictional Organ with a Surface Anatomy of Four Lobes. This is more a short-story/novella collection than a novel. It contains four tales, and each of these tales has something to do with each other, and the characters relate and connect to the other characters in the other stories. Most importantly, however, all short stories have something to do with the liver. This perhaps is the most bizarre and yet most interesting facet of this book. After all, who writes a story about someone's liver?

The first story is entitled Foie Humain, and without giving everything away, this perhaps was a very good introduction to the series. The story is told from the perspective of an innocent bystander, and because of that, the story feels like it lacks direction, at times (this happens to be the main reason why I hated the latest Will Self book I read). All the bystander does is narrate what is happening in a certain pub in SoHo. However, at a sudden twist in the end, one realizes that one has just read the most bizarre and disturbing short story ever, involving an alien with a rather interesting appetite. Think French haute cuisine.

The second story is entitled Leberknödel, and this is the story of an old lady with liver cancer, who is originally from Britain, but goes to Switzerland to undergo assisted suicide. Her daughter is one of the regulars in the bar in SoHo that was mentioned in the first story. The interesting thing is that the old lady decides not to kill herself, and because of that, her body seems to be rejuvenating to the point that people around her thinks that she is a miracle. This starts a huge religious fiasco, with priests trying to prove that a miracle has happened and therefore someone new should be canonized as a saint.

The third story is another bizarre one. It tells the story of Prometheus, who according to ancient Greek mythology, is this Titan who is punished by Zeus because he stole fire from the Gods and gave it to humans. His punishment involved a bird eating his liver every night, as he is tied to a rock, and his liver grows back again. However, what is different here is that Prometheus and the rest of the characters in Greek mythology are living in modern-day London. Zeus is this corporate head, and Prometheus is one of his employees. Totally bizarre.

The last story unfortunately pales in comparison to the other three. Told from the point of view of an HIV virus, it tells the story of a group of drug addicts, and how they pass the HIV virus around themselves. Nothing too spectacular.

Anyway, contrary to my previous experience with Will Self and his satirical fiction, I think I like this better. I am glad that I gave him another chance. Perhaps that's just the inherent characteristic of satirical fiction: what I thought as having lack of direction in the novel actually worked out here, and the short story is the right size for it. Somehow, a full novel's worth of satire seems to be too much for me. After all, it gets tedious reading about a universe when there are so many things that one has already violated. There have been too many pieces of common sense that has been thrown out the window. However, in the short story genre, the amount is just right.

So, I enjoyed reading this book. I think I am giving it 4 out of 5 stars. 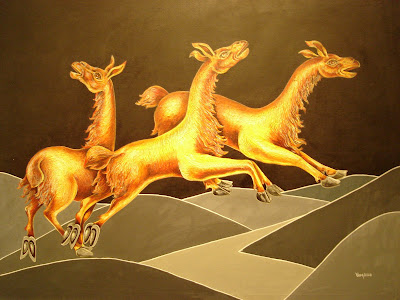 (Flying Llamas, from my Modern Art in Cuzco Series)