The funny thing about human language is that people use language, which carries meaning, and yet they actually say (sometimes unintentionally) more than what the utterance's meaning actually carries. Here's one example.

This utterance, when observed in a dinner scenario, usually is uttered when the speaker wants the addressee to actually pass the salt to the speaker. In essence, it is a form of a request. However, is that what the sentence actually means?

Here, let's make the distinction between what-is-said and what-is-meant. What the utterance actually and literally says is that it is a question about the ability of the addressee to pass the salt. Thus, the literal answer to that would be either yes or no, since it is simply asking about the ability of the person to do the action. However, that isn't what the speaker is trying to convey. Instead, the speaker is actually asking the addressee to perform the action of passing the salt. This added information that is apart from the literal meaning of the utterance is the utterance's interpretation, or what-is-meant. Here's another example.

4. John ate an apple and an orange.

The sentence in 4 is only true if John ate an apple is true and John ate an orange is true. If you reverse the order of presentation, as in 5, the truth value or meaning of the utterance is the same.

5. John ate an orange and an apple.

However, it seems that the sentence in 2 and the sentence in 3 are different in meaning, in that somehow, we get this idea that the order of events are different. In 2, they got married first and then had a kid, but the reverse is true in 3. Just by looking at the semantics, they seem to be equivalent however. The difference is in the interpretation.

Now, here is another example that illustrates the difference between meaning and interpretation.

6. Does Paul have curly hair?
7. Well, he flies to New York City every weekend.

If one answers the question in 6 with the statement in 7, it somehow feels that it is not coherent, and it does not make sense. This is in essence a non sequitur. However, consider the following.

8. Does Paul have a girlfriend?
7. Well, he flies to New York City every weekend.

Now, we simply changed the object of the question, and now the conversation makes sense. The meaning of the utterance in 7 simply states that there is an entity called Paul and he performs an action of flying to New York City every weekend. However, in addition to that, listeners somehow feel that it is a relevant answer to the question posed in 8 and therefore do not take it as non sequitur, because the statement in 7 has an added interpretation in addition to its literal meaning.

So yes, these are just a few examples in which people perform inferences, where they add more stuff in addition to the literal meaning of the sentence. There's a huge swath of literature about this topic, and I have only provided a coarse scratch at the surface here, but people have pondered on these things for quite a bit. 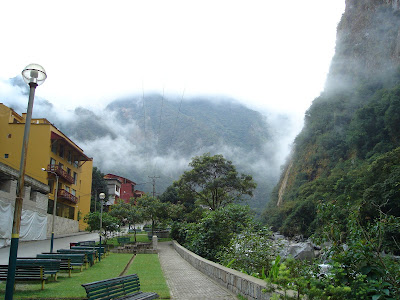 (The Clouds are Low in Aguascalientes, from my Sacred Valley Series)