As I said before, Cholula is famous for the largest pyramid that has ever been built, the Piramide Tepanapa, or Tlachihualtepetl. This happens to be the world's largest monument and pyramid that has ever been built, by volume. In fact, it is so large that when the Christians arrived, they saw a hill (since by that time, the pyramid has already been buried) and they never realized that it is actually a pagan sacred site, and they went ahead and built a church on top of it. What a horrible idea!

So after lunch, which I blogged about in my previous post, we went ahead and walked over to the hill. This was a little bit of a walk towards the east, and it was a good way to digest lunch. After about ten minutes from the Zocalo, we saw the site. 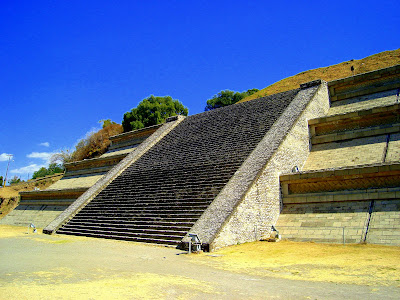 That was what we saw. It was immense. And the hill that makes up the pyramid is rather huge too. It was really big that the pyramid is still being excavated. And so we set out to climb this monstrous thing. 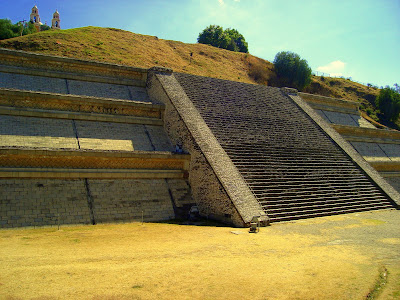 If you look at the above picture, you can see the church at the left corner. And the church was pretty big too. So keep in mind the scale, and hopefully you'll realize that when I say the pyramid was big, it was really big. 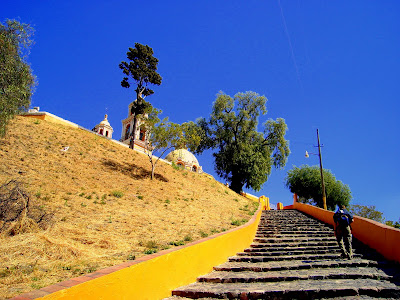 Here's us climbing the stairs. There were plenty of stairs, and the sun was bright too. Upon reaching the top, it provided us with a view of the dry and desert-like panorama of the area. It's the middle of winter, and yet it was warm. I wonder what the temperature is like when the axis of the earth tilts back to summer. 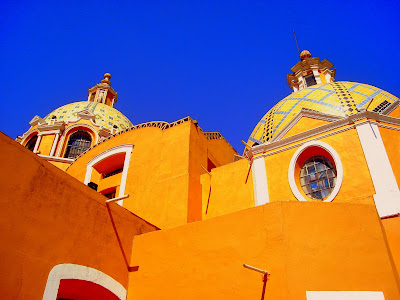 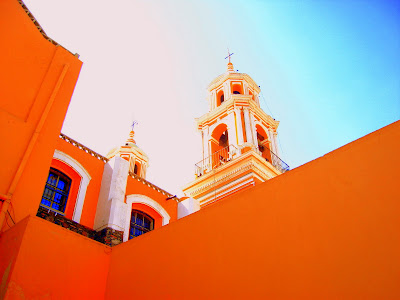 The above two photos show the orange church that is found at the top of the hill. I actually liked the way this church looked like. Unlike the one in Puebla, the facade is rather austere and reminds me of these adobe structures in the US Southwest. Instead of having individual stones that make up the walls, the walls look like solid clay. However, this is just the impression of a naive person like me. 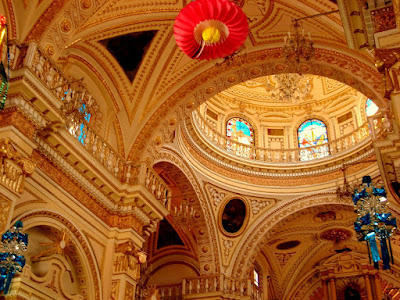 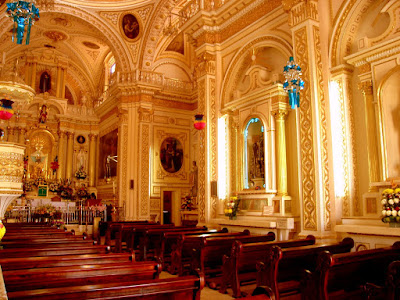 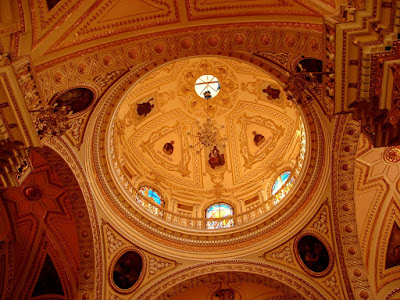 The above three pictures show just how amazing the interior is. When we were there, there was a service that was about to finish, so once the congregation exited the church, the two of us had the entire inside of the church and we took pictures quite a bit. I especially loved the golden-colored decorations that this church had, as opposed to the other ones that are rather grey-hued.

After enjoying the church, we decided to climb down and enjoy the rest of the pyramid. We heard that there are tunnels that can be explored, but unfortunately, they were closed because they assessed that it was currently dangerous due to the excavations that they were doing with the pyramid. So all we got to see was the outside. 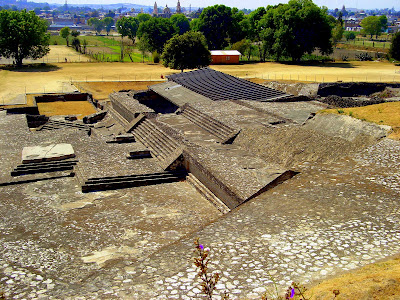 This is one excavated part of the pyramid. As you can see, it's very complicated, with several rooms and steps. I have no clue why the pyramid has bee buried, to the point that when the Christians came, they thought it was a hill. Usually, what happens is that they dismantle the pagan structure and use the blocks to build a Christian structure. This was the case with the Mexico City Cathedral, which used building blocks from the pagan structure of Templo Mayor (more about this later). 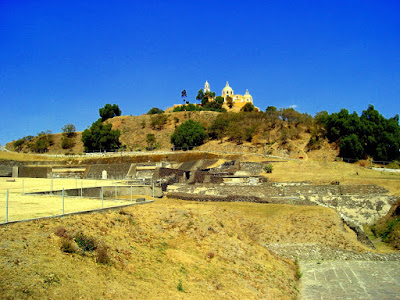 This is just another picture showing the scale between the church and the overall pyramid. As you can see, the majority of the pyramid hasn't been excavated yet, and it is greatly buried to the point that trees even grow on top of it. 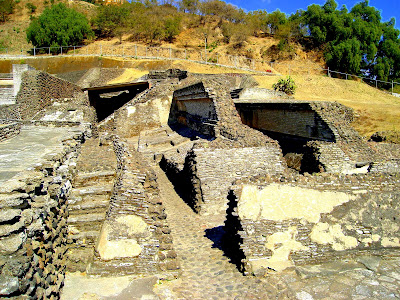 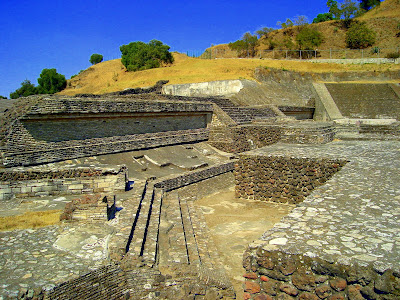 The above two pictures show some details of the archaeological activity that has been going on in the area. It reminds me of my visit to the Inca sites in Peru, and it definitely makes me admire the immense architectural knowledge that these ancient peoples had. 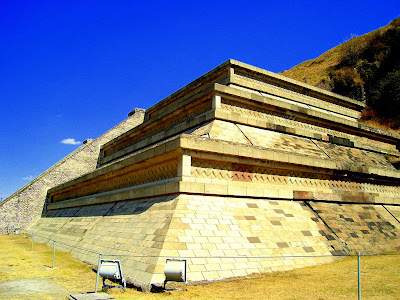 The final picture above shows the side of the pyramid that has been fully excavated and cleaned. It's just a small facade, and the archaeologists still have a long way to go if they want to see this whole pyramid.

Thus, we got our fill of Tlachihualtepetl and the Iglesia de Nuestra Señora de los Remedios. It was time to move on. We were glad we saw this, since Mexico has plenty of interesting archaeological sites to discover. This is definitely one of them.