Mexican Meanders: The Town of Cholula

During my week-long stay in Mexico City, we made it a point to do an excursion somewhere outside of the metropolis. It's fun to see sights within the city and visit museums and admire architecture and such, but sometimes, a change of pace would be great too, and so in order to do that, we decided to head out of the federal district and ride a bus. Our destination was somewhere in the southwest, a little town called Cholula.

Admittedly, I knew little of this town until Puku mentioned to me that we should go. I then looked it up, and apparently the world's largest pyramid by volume is there. Wow, I never even knew that.

So, early that day, we met and headed towards the bus station. We bought our bus tickets, and fifteen minutes later, we were on the road. Riding a bus in Mexico was interesting: there were security measures that were in place that we never even thought of. First, they scan your body with a metal detector wand, and after that, since it was assigned seating in the bus, they photographed every passenger with an iPhone, and presumably, they sent all the pictures to the headquarters, so that if later, someone attempts to commit an armed robbery with the bus, they would have an easier time finding out who is the suspect.

So we were on the Mexican road, and after two hours on the road, we finally found the place. We were dropped off on the main road, and we had to walk a little bit to get to the center of town. Upon finding it, we found the Zocalo. 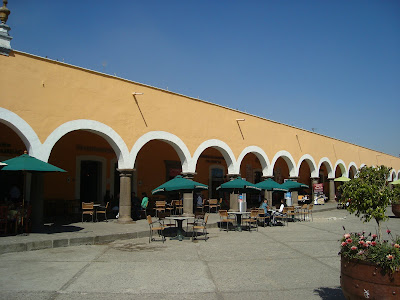 This was the Arabian-inspired building that housed pretty much all the decent eating establishments in the town. In fact, this was where we had lunch. For lunch, I had some sort of eggs in mole. I looked at the menu, and found the thing that I knew the least about. I usually order what I do not know when it comes to traveling and eating, so that I would know them later on. 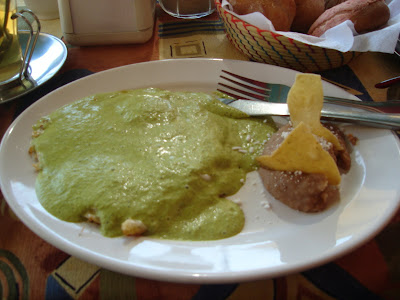 That was a picture of my lunch. It was amazingly good.

After lunch, we decided to head east, because that was where the great pyramid was. But before that, we took pictures of the town, which was small, and yet beautiful in its own sense. 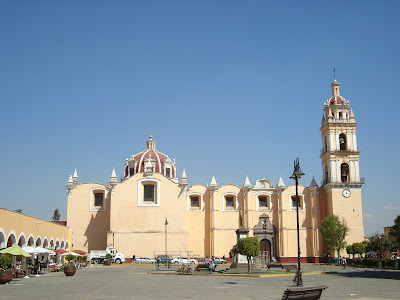 This was a church at the Zocalo. Unfortunately, we weren't able to get in, since it was closed. But that's not a problem, since there's another church that was waiting for us. 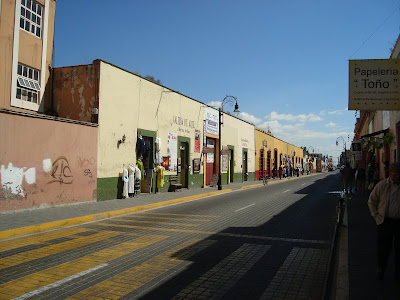 The street scene of Cholula is somewhat barren: for some reason, it strongly reminds me of desert, but it does have the right amount of activity. There are plenty of shops of all kinds, from dress shops for the locals, to Internet cafes, to pubs. There were plenty of shops that displayed dresses right at the sidewalk, like the picture above. 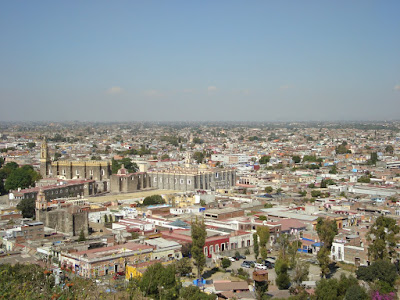 Cholula is actually quite expansive, but the historical center is rather compact. The picture above is taken when we climbed the pyramid, well, actually, we climbed the church that was built above the pyramid. It was a bizarre thing, there's a pyramid that is still being excavated at the bottom, and on top of that, there's a rather magnificent church, and I suppose when they built the church, they never thought that there was a buried pyramid underneath. How blasphemous!

Anyway, the Great Pyramid of Cholula and the church above it was a wonderful sight to see too. However, since that deserves a topic of its own, I will blog about it then. It'll be my next topic, look for it!