I find it quite interesting that Latin American cities have this place in the middle of their cities that serves a gathering point, a meeting place, a middle point of some sort. This is nothing else but the square, and they take on various names, depending on where they are. In Bogotá, it is called the Plaza de Bolívar. In Quito, it is the Plaza Grande. In Cuzco, it is the Plaza de Armas. And in Mexico City, it is the Zocalo.

So far, this is the second largest town square I have been to, so far (the largest I have been to is Charles Square (Karlovo náměstí) in Prague, Czech Republic). Perhaps what I find unique with Latin American squares is that the square forms the axis of the historical center of the city, where everything branches out. This is also true for Mexico City's Zócalo, where all the historical sights are found nearby. So, what can be seen from the Zócalo? 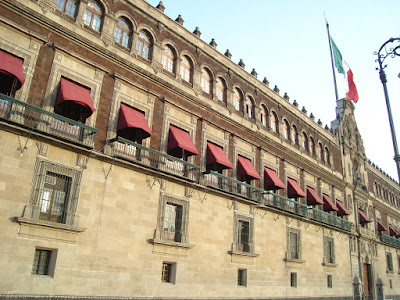 First, you can see the Palacio Nacional. I've actually been inside this place, but unfortunately, they didn't want you to take pictures, which was reasonable, if that was the building where the Mexican government functions from. I saw portraits of various Mexican presidents there, and saw grandiose halls and dining rooms where several heads of state have set foot in. It was an awesome place and I recommend it to anyone visiting. Besides, entrance was free. 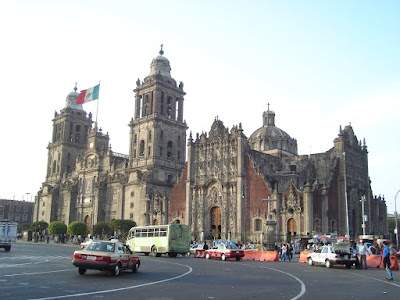 The cathedral was also there. Here's a shot from the east side of the Zócalo, where one can see the cars and the people in front of it. It is notable to see the Mexican flag flying on top of the cathedral. 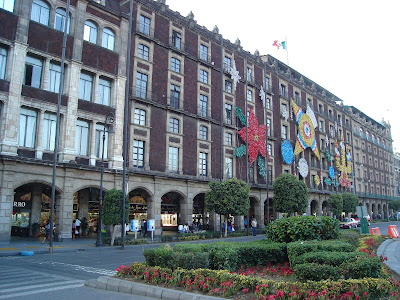 There's a bunch of shops on the west side of the square, ranging from fast food joints to gold shops to pawnshops to shoe-shining outfits. This is also where Calle Madero begins, which reminds me of the long stretch of pedestrian street from Sannomiya to Motomachi in Kobe. This is also where I found that awesome tacqueria, where tacos are cheaper than a bottle of soda. 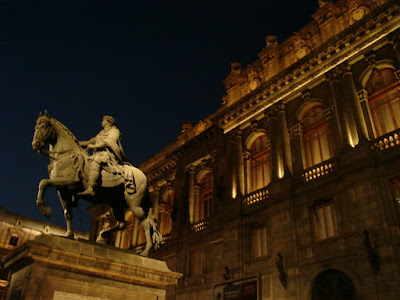 A few blocks west, but before one reaches the Alameda, is this statue. Apparently, this used to be in the Paseo de la Reforma, but was moved here, in front of the Museo Nacional de Arte (more of this museum later). Taking photos during the night made me realize that I needed a better camera. 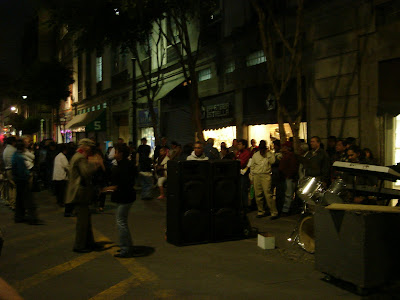 Mexico City stays up late. This was a street scene I saw a few blocks west of the Zócalo, right next to Allende Metro Station. People were dancing to the tunes of a band, and by people, I mean everyone, from young couples to not-so-old ones. 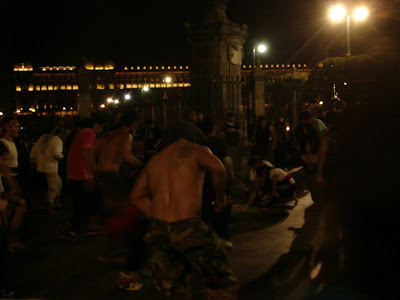 Speaking of dancing, there's also another form of dancing that I saw which happened on the streets. The picture above shows what it is, and honestly, I don't really know. This happened a stone's throw from my hostel (my hostel was very centrally-located) and there's rhythmic movement involved, as well as stones and incense. My guess would be that they are recreating the Aztec dances (there's this weird circular diagram that they seem to be reading at the middle of the crowd), and they had interesting noise-making attachments on their feet. Watching it was rather interesting and hallucinating.

So there, there's plenty of things to do and see in and around the Zócalo. There's people playing music, shouting over the megaphones, preaching, offering shoe-shine services, and so on. It's the heart of the city, where everybody traverses, and one can witness the daily beat of the megalopolis.