The Quirkiness of the Screen

Recently, we watched a rather interesting and quirky film that was produced in Iceland. It's title was 101 Reykjavik, and it was perhaps one of the more interesting films that we have seen lately.

Meanwhile, Hlynur's mom brings home a friend from Spain, Lola. They spend the Christmas together, and after Christmas, Lola stays while Hlynur's mom goes away on vacation. Hlynur's dad is an alcoholic, and apparently his parents got divorced back then.

Now, as the story progresses, plenty of quirky things happen. We learn that Hlynur's mom is a lesbian, and Lola is actually her lover. Hlynur and Lola have sex while high and drunk and it is implied that Lola's child is actually due to that event. In any case, plenty of wrong things happened, but in the end it all summed up for the better.

So, we had a third person watch this film, and she said that it was one of the weirdest films she has ever seen. For us, however, this is more normal. I dunno, I like quirky. This is a film that perhaps not a lot of people can appreciate, and it was a hidden treasure showing how humans can be weird. After all, normal is just the average of all the weirdness that is found in the world, right? 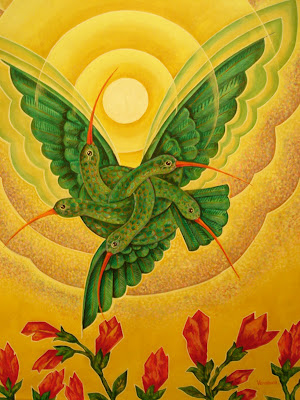 (Interlocking Birds, from my Modern Art in Cuzco Series)