Last Friday, I attended a concert in the university. It was part of the Faculty Recital Series, and as the name suggests, the performers were faculty here in the University at Buffalo. The concert was held in the Lippes Concert Hall in Slee Hall, and it was Jean Kopperud on clarinet and Tom Kolor on percussion. And the concert was entitled Rated X II, because they were five premiere performances that were written for the Rated X Project.

I am not really sure what the Rated X Project is, but I am guessing that it has something to do with modern 21st-century music. At least the five pieces that I have heard last Friday night were definitely not your run of the mill classical music. It was definitely something else.

So why did I attend this?

Well, I have to say I think I am a fan of Tom Kolor. If my memory serves me correctly, he joined the Music department a couple of years ago, which was around the time when I saw fliers around campus saying that there was a concert for the Percussion Ensemble (really, there's a percussion ensemble? cool!). Then I watched his faculty recital, and that was phenomenal. I think I have attended almost all of the concerts in which he was involved in.

Now why, you might ask? Well, I suppose I just never get bored watching people bang pots and pans rhythmically. It's this bizarre sense of wonder at how from such a state of chaos, there's actually systematicity that can be found, and that perhaps is the most attractive aspect for me.

21st-century music is also something that I usually have a hard time wrapping my head in, and that I find a challenge. I mean, yes, I used to be a musician in a past life, and I know how Bach's counterpoint, I know the sonata form, I know impressionism, and so forth. But I don't have a lot of data points with respect to modern music. It's this big blob of variance that needs explaining, and listening to what composers are up to nowadays is just fascinating.

So what was played last Friday? It was basically a concert for percussion and clarinet. Most of the pieces were written with the two performers in mind, and in some of these pieces, the composers were right there in the audience. They played five pieces, in order of performance: Evocations by Louis Karchin; Twin Suspension by John Aylward; X-ASTI by Yiorgos Vassilandonakis; wills & wonts by Jeff Stadelman; and Throat by Mathew Rosenblum. All pieces were quite phenomenal, and featured innovative uses of the clarinet, as well as usual percussive tricks, such as using a violin bow to play the vibraphone for example. The last piece was the most striking, and thus, a good finale for the night, since it included audio samples, and therefore the performers had to wear headphones to make sure that they were on time with the computer.

Overall, I am glad that I went. It was such a wonderful session of brain activity I should say. 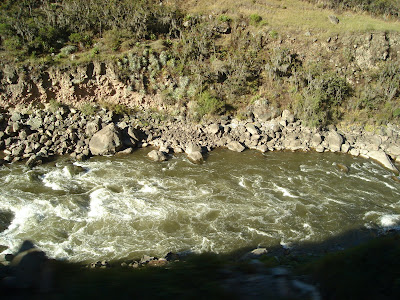 (Following the River, from my Sacred Valley Series)