Book Review: The Life and Opinions of Maf the Dog, and of His Friend Marilyn Monroe by Andrew O'Hagan 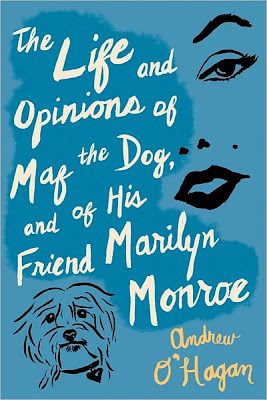 When was the last time I read a novel that was narrated by something that wasn't human? I think it's been a while, I can't even remember. I was browsing the new books section of the university library when I saw this one, and when I saw that it was narrated by a dog, my interest was piqued and so I decided to borrow it.

Yes, this is a novel that is narrated by a dog. It's actually about the life of Marilyn Monroe, but from the perspective of her Maltese dog, whose name was Maf. The novel starts when Maf was bred by some Russian emigres, former Russian aristocrats who now runs a breeding business in the United States. Frank Sinatra buys this Maltese, as he intended it to be a gift for Marilyn Monroe. Marilyn on the other hand, being the diva that she is, brings the dog to every function and party and shooting that she does. The dog therefore sees everything, everything that happens with respect to Marilyn's life.

So the plot is pretty much that. The novel ends in an episode where Marilyn and the dog is in some cemetery, and they visit the tomb of an old friend. Marilyn also pops some pills, of an unknown nature. There is no big climax, although there is a rather intense argument between Frank Sinatra and the rest of the characters (including Marilyn Monroe) near the end. In short, given the fact that the narrator is a dog, perhaps the best thing a dog can do is to provide a glimpse of the life that Marilyn Monroe has been living. Of course, the dog would only know about the things that the dog is witness to.

Obviously, I was interested in this novel because of the strange set-up it has. However, I found it unfortunate that the topic failed to excite me. I mean, apart from the fact that a dog is the narrator, apart from the fact that there are certain assumptions that were given here (and I find them cute actually, that dogs and other animals can freely converse, and there's no language barrier, and so forth), there isn't anything else that interested me. Perhaps it's just my lack of interest in the life of Marilyn Monroe. She's a diva, she's an actress, so what. She acted dumb, I don't know if she really is dumb, but she's the last person I would expect to say something or do something profound. The novel portrayed her as some sort of emotional victim, going to psychoanalysis therapy many times, but I just get this feeling that she was so fake, exuding this aura of being a victim of her own trade, but seriously, there are other people who are way more disadvantaged than she was. I just failed to empathize.

Anyway, that was that. I should have expected that. Oh well, I was curious at the fact that a dog was narrating this, so I read it. I'm done with it. If you feel like reading an atypical novel (in the sense that it's narrated by a dog), go for it and read this one. Otherwise, I'd like to let you know that I was a little bored. 2 out of 5 stars. 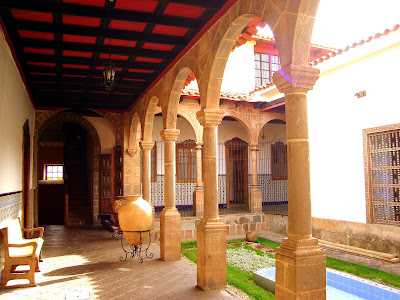 (Arches and Columns, from my Cuzco's Colonial Structures Series)