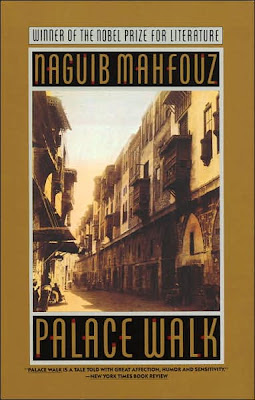 This is perhaps my first venture into Arabic literature. I haven't read anything that was written by writers hailing from the Middle East, and so when I figured I should change that, I decided to look first into the works of Nagīb Maḥfūẓ, who was an Egyptian writer who won the 1988 Nobel Prize for Literature. And with that in mind, I selected the first book of his Cairo Trilogy, entitled Palace Walk (Arabic: بين القصرين Bayn al-qasrayn).

This book tells the story of the al-Jawad family, headed by the patriarch Al-Sayyid Ahmad. In his house lives 5 sons and daughters, his wife Amina, and a servant Umm Hanafi. The eldest son Yasin is 21 years old and is the son with a former wife. The second son Fahmy is 19 years old and is a law student. The elder daughter is Khadija, and she happens to have a large nose. The younger daughter is Aisha and she is more beautiful than her sister. Finally, the baby of the family is Kamal, the youngest son, who is ten years old and sees every event through the innocent eyes that he has.

There is a lot of conflict that is presented here, and the book starts from the middle of the World War I in 1917, and ends at the Egyptian Revolution in 1919. The father, Al-Sayyid Ahmad, is a very strict father, and to me, he is rather totalitarian when it comes to his family, but magnificent and magnanimous when it comes to his business (which is running a store) and his friends. More importantly, he spends his nights with friends, wine, and women. In short, his personality inside and outside his house are very different: very strict when it comes to his family, but very promiscuous when it comes to outside. His wife knows of his indiscretions, but simply accepts it as a fact of life since after all, this is traditional Muslim society, where women seems to be treated as if they are simply men's possessions.

Marriage is a big thing in this society, and three of Al-Sayyid Ahmad's children get married: Khadija and Aisha, and Yasin, whose marriage eventually ends in divorce. This is due to the fact that Yasin acts like his father in being promiscuous and yet his wife is not as traditional as Yasin's mother. Khadija has a big nose and therefore few people would like to marry her, and instead plenty of marriage proposals go to Aisha instead. However, since she is the younger daughter, her family declines because they want the older daughter to get married first.

Fahmy asks his parents to arrange a marriage for him and his neighbor Maryam, but since his father is strict, declines because Fahmy is still not finished in school. Later on, he joins the revolutionaries who protest the British presence and want independence.

There's more to the story than what I have narrated above. In short, this is a highly complex and dense novel, worthy of reading. I felt like this is like one of those thick books like Doctor Zhivago and War and Peace, where plenty of things happen to the various characters. To some degree, this is more a novel about Cairo and not a novel about the family al-Jawad: the author simply needed characters to narrate the story of the city. In this respect, this novel is about the daily activities of a city, from its emergence after the war to the creeping presence of the foreign influence in the embodiment of the British soldiers.

This novel also gave me a glimpse into Muslim society, and has piqued my curiosity with respect to the norms and values that Muslims uphold. There are beliefs that were portrayed in the novel that I found ridiculous and that I disagree with them, but it is definitely curious to know about them. Of course, the book is set in 1917, which means that these might be traditional norms that are not in fashion anymore nowadays.

Overall, I enjoyed reading this book, and look forward to picking up the subsequent books of the trilogy. I give this book 4.5 out of 5 stars. 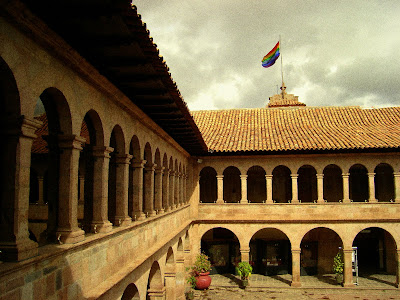 (Art Gallery of Cuzco, from my Cuzco's Colonial Structures Series)