Book Review: The Year of the Death of Ricardo Reis by José Saramago 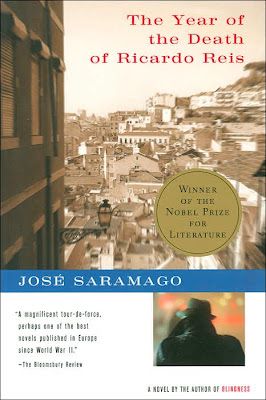 This is the ninth book I have read that was written by the wonderful José Saramago. I have this goal to read all of the books that he has written which is available in English, so for my ninth book, I picked up The Year of the Death of Ricardo Reis, which was originally published in Portuguese back in 1984.

What is this about?

Well, this is the story about the final year of Ricardo Reis, who is the title character. Ricardo is a doctor who has been living in Brazil, but decides to return to Portugal upon hearing that the Portuguese writer Fernando Pessoa has died. He arrives on a steamship, and finds a hotel. He checks in, and for some reason, decides to just live there for 3 months. In the meantime, he develops an affair with a chambermaid, Lydia, and also develops a friendship with romantic overtones with Marcenda, a young girl who is a frequent guest of the hotel, since she has been seeking treatment for her paralyzed arm, and she happens to live in Coimbra.

Three months pass, and he decides to move on, so he finds an apartment, and decides to continue his medical practice. His relationship with Lydia continues, albeit lukewarm. The novel ends with his death, after witnessing a small mutiny that happens involving three battleships.

So I just basically narrated the gist of the whole story, pretty much giving everything away. Why did I do that?

Well, for me at least, the more attractive aspect of this novel is not the plot, but the literary devices and the themes that this novel exploited. Plot-wise, pretty much nothing happens in the book. Things move slowly. Ricardo is not driven, he doesn't seem to care much, and so the narrative just tells us readers of the mundane things that happen with his life. However, this exact mundane quality of the narrative is the most attractive thing for me, as this allows the reader to get a better picture of the characters. The plot might be moving slow, but the way Ricardo Reis is presented to the reader is so deep, dense and graphic that I think Saramago was able to capture every minute detail of the character. Even the way Portuguese society functioned in that setting was quite detailed: I love the way Saramago narrated the social political dynamics that went around in apartments, how gossip was passed around, both in between the hotel staff and the various apartment tenants. I also loved the aspect of meta-literature that was always present in Saramago's novels: Saramago inserts these commentaries on the characters, giving snippets of commentary about why the character has said a specific line, or what might have been a more plausible alternative in a given scenario, and so on.

Of course, a Saramago novel is not complete unless there is a fantastic factor in it. In this novel, it is the case that Ricardo Reis can see dead people. There is one dead person that he keeps conversing with, and that is Fernando Pessoa. Francisco is a ghost in this story, and ghosts in this story can stay on earth for 9 months, until they are totally forgotten by the living, and therefore disappear. In reality, Fernando Pessoa is a Portuguese writer who is credited for inventing the concept of the heteronym, which is an imaginary character that an author uses to write in a different style. The real Fernando Pessoa happens to have created many different heteronyms, and one of them was Ricardo Reis. In this novel, not only is a real-life character made dead, but a fake character was made alive and able to talk to a dead person. It is such a fantastical set-up.

Overall, it is a book that started slowly, but gradually gained momentum. This is one of those books that I recommend reading more for its literary content not for its plot. I'd say if one were to start reading Saramago, this should not be the first book to pick up. One needs a lot of Saramago-related background information in order to fully appreciate and digest this book. 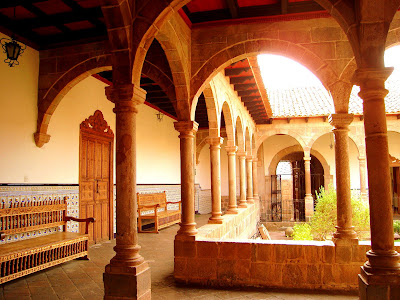 (A Cuzco Courtyard, from my Cuzco's Colonial Structures Series)