I noticed this article a while ago, published in the New York Times, about the wonderful Filipino dish called adobo. And upon reading it, I couldn't help but agree that the wonders of this dish is not in the ingredients, but in the multitudes of variations that exist.

See, the thing is, I myself don't know what exactly constitutes an adobo. I have this idea that if one mentions adobo, then without qualifying it further, it should refer to the dish that is usually made with chicken or pork, with soy sauce and vinegar. I think this is the case since there are other meats that can be called adobo and yet it doesn't involve soy sauce and vinegar. Squid, for example, can be adobo, but the way my family makes it, I don't remember seeing soy sauce in there, just vinegar. A quick Google image check suggests that this is mostly the case, with the majority of pictures showing a blackish dish, due to the fact that Filipinos aren't known for discarding the ink sac in squid.

When it comes to simple adobo, however, the pictures are more varied. Some look like stews, some look more like caramelized meat. It seems that the ingredients should somehow involve soy sauce, vinegar, garlic, black pepper, and bay leaves. I remember being taught that cooking adobo is easy, and it's just a matter of 4-3-2-1. What this means is the following: one puts the meat in the pot, presumably chicken, and puts 4 tablespoons of soy sauce and vinegar each. Then chopped onions, and 3 tablespoons of soy sauce and vinegar each. Then garlic, and two tablespoons of the two liquids, and finally 40 dashes of black pepper, and one tablespoon each of soy sauce and vinegar. That's how I learned to make it. But really, I gauge by the smell; when it smells right, then I know I cooked it right.

There are variations to this. Some people put coconut milk, and that is a derivative from the original recipe (assuming there's an original). My sister and I cooked this version, especially when we found lemon grass in the grocery store, because coconut milk and lemon grass go together when mixed with the previously mentioned ingredients. That was awesome.

And the other day, I decided to be heretical in cooking adobo. I had put 6 chicken thighs in the pot, and emptied a big can of coconut milk. Without covering it, I let it boil, together with one big chopped onion, one cup of soy sauce, one cup of vinegar, 2 tablespoons of ground pepper, a couple of bay leaves, and the heretic ingredient, one teaspoon of oregano. I hate the garlic so I didn't put it in the first place. I let it boil and simmer until the liquid was reduced to about half. Overall, it took about 45 minutes, and the resulting chicken was tender that it easily detaches from the bone.

The smell was different, obviously. But I think I like it, as it smelled like a bastard child of a Filipino and an Italian. Quite scandalous in my opinion. 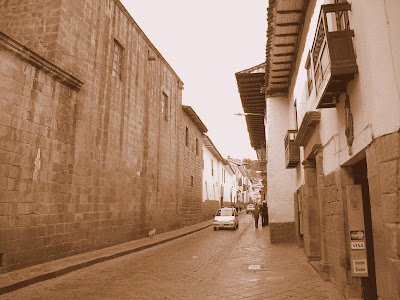 (Cobblestone Streets in Sepia, from my Cuzco's Colonial Structures Series)