Perhaps I have never attended a concert or a recital that was more original than this one, when I picked up a ticket for a performance by the JACK Quartet. It happened that I was able to get complimentary tickets from the university's Music Department, and therefore I asked for tickets for this concert.

The JACK Quartet is composed of Christopher Otto and Ari Streisfeld on violins, John Pickford Richards on viola, and Kevin McFarland on cello. They apparently met while they were attending Eastman School of Music. They were rather young in appearance, but the way they played their music betrayed the maturity they had and also showed how intimate they know the music that they were playing.

I cannot say that I have attended plenty of string quartet performances. I have only attended the Tokyo String Quartet when they visited Buffalo. Aside from that, not much. This is because most of the time, when a string quartet visits Buffalo, they play Beethoven. Not that I have anything against Beethoven, but there are plenty of other lovely pieces that are written for string quartet, and yet they aren't being played. This is because apparently, there was a rather rich benefactor to the university who left a large sum of money so that all of Beethoven's string quartets are performed in its entirety every year here in Buffalo. The will even specified the order in which the string quartets are to be played. You can read all about it here. However, now that I have a way to get complimentary tickets, perhaps that will change.

But I digress. This entry is supposed to be about the JACK Quartet. So yes, there were four pieces that were on the program. The first one was String Quartet in Four Parts by John Cage. They performed this marvelously, although I cannot say I liked the music much. Perhaps I am just naive in music theory, but the fourth part didn't seem to fit the first three parts. It was definitely very different though, and it takes an open mind to appreciate it.

The second piece was Second String Quartet by Aaron Cassidy. I only later realized that he was a UB alumnus, who finished a doctorate in composition in our very own music department here in the university. In fact, he was there in the audience, sitting behind me. This piece I actually liked. It was written in graphic notation, and since I do not know how to read graphic notation, it was just a miracle for me seeing all four players synchronized in their executions of the piece. I saw the various string instruments played radically different from what I was used to, and there were plenty of hairs that were severed from their bows. It was quite electrifying.

After intermission, the third piece that was played was Study IV for Treatise on a Veil by Matthias Pintscher. This was another amazing piece, and it made use of the "prepared string instrument". I don't know whether that is the right terminology for it, but similar to a prepared piano, there were foreign objects that were inserted in between the strings, therefore altering the overall quality of the sound that would be produced.

The final piece was String Quartet No. 2 by Gyorgy Ligeti. I was only familiar with some of the piano pieces by Ligeti, so this was definitely something I haven't heard before. They never failed to deliver, as the performance of this piece was again, absolutely electrifying. It's amazing how music that is not so accessible to the public is executed beautifully in the hands of these four artists.

So yes, I enjoyed my evening of modern music. I realize that my taste in music has been gradually extended, from the usual pieces that most people would know, to pieces that are usually considered to be in the fringes, like the ones that were performed that night. I remember buying a CD of a recording of Bela Bartok's 6 string quartets almost ten years ago, and finding it very much amusing since it was nothing like what I have heard at that point. This time, Bartok's pretty much vanilla (and there's nothing bad about that), and my fascination is now due to works by Iannis Xenakis, Philip Glass, and other composers such as the ones mentioned above. 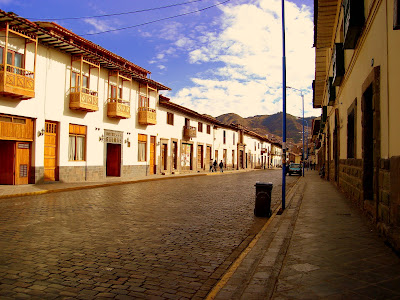 (Streets and Balconies, from my Cuzco's Colonial Structures Series)