It is such a rare time when you watch something and realize that wow, the thing you're watching is the product of some wicked rare talent. I guess that's how I felt when I watched a performance of Les Percussions de Strasbourg, a contemporary music ensemble, supposedly the very first Western percussion ensemble. They were founded in 1962, and since then, has commissioned several pieces of twentieth-century music. Apparently, the concert I watched was in the planning board for ten years, and it was finally come to fruition this year, since the group is currently in their North American tour, and one of the stops they made was Buffalo.

The program included three pieces, and they were all virtuosic pieces for a percussion ensemble. The first piece was Ed Campion's ,Ondoyants et Divers, which was rather simple in set-up: the six performers were all sitting in a row, and they had a number of instruments each. The complicated part for this one is the rhythm, as always with any percussion music.

The second piece was John Cage's First Construction. I actually have heard this before, last December actually, but the instruments they used this time were not the same, so the timbre of the whole piece was radically different. There's still the washboards, there's still the prepared piano, but that's about it. Everything else was different. The rhythms were the same, but they were played in a different instrument.

After the intermission, the last piece they played was Iannis Xenakis' Pléïades. This has four movements, Mélanges (Mixtures), Métaux (Metals), Claviers (Keyboards), and Peaux (Skins). These titles actually give the overall characteristic feel of the movement. The first one was entitled "Mixtures" which involved the performers playing various different instruments all over the place: they had to move places several times. The second movement was very metallic, using a lot of non-pitch instruments. The third movement involved all of them playing a pitch instrument, either the marimba or the vibraphone: in fact, it sounded like they were playing the keyboard. Finally, the last movement involved only drums, as the name suggested. I loved the surround effect it had, because there was a segment that involved rolls that "moved" from one part of the room to the other; this was done by having musicians roll their timpanis from one side of the room, and the adjacent musician takes over, and so forth. It was done very smoothly.

Overall, it was a great performance, and I absolutely loved it. Add to that, my tickets were complimentary, and it was one of the best concerts I have attended. 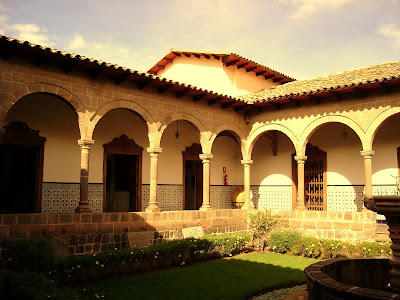 (Courtyards and Garden, from my Cuzco's Colonial Structures Series)