So I have been following the events in Libya recently. I have been watching the news in Al Jazeera ever since the uprising began, from the time that the two Libyan air force pilots flew their planes to Malta and defected after being ordered by Muammar Gaddafi to bomb protesters. I have watched both of his televised speeches, including the one where he was holding an umbrella, as well as the speech by her daughter Ayesha al-Gaddafi in front of the statue of a fist crushing a US fighter plane in Bab al-Azizia.

The interesting thing is, somehow this whole incident of the Libyan Uprising has allowed me to introspect inside what might be going on inside the mind of Muammar Gaddafi, perhaps one of the most autocratic rulers this planet has witnessed.

See, one would wonder what state of mind Gaddafi is in, if he gives statements such as claims about foreign countries and Al-Qaeda distributing hallucinogenic drugs in the form of pills to drink, or statements along the lines of killing you if you don't agree to me ruling you.

The thing is, Mr. Gaddafi, dictatorship is so out of fashion in the 21st century. Do you really care for your people, or do you just care about your throne? You declared a ceasefire, and yet nothing really stopped. You have silenced dissidents in a systematic fashion. Are you really that insecure and emotionally fragile that you cannot handle it when people voice criticism against you? Do you really need to resort to erasure?

See, I am all for self-determination. South Sudan wanted to split, fine, let them split. Kosovo declared independence unilaterally, go for it. Egyptians and Tunisians wanted a change, and now they have it. I presume the Libyans want change too, and yet you think you're this infallible entity that has the right to rule your country.

But Mr. Gaddafi, the moment you opened fire on your citizens, you lost that credibility. Your diplomats have resigned all over the world, as they do not want to represent a government such as the one you are trying to keep. Your pilots defected to other countries and asked for asylum. You cannot just declare yourself ruler of a country and expect everyone there to allow you to do that. I think what you need to urgently do right now is to wake up. Wake up, from this delusion of grandeur you have that has been causing the Libyans horrendous nightmares.

The thing is, I think you're insane. You're mentally unstable. You're irrational. And if I were a Libyan, I would be very afraid. You are not God. As much as you might want to think otherwise, you're not infallible. You're also just a human, and it was just the result of a historical accident that only now have your rule been seriously challenged, something that you somehow successfully kept since 1969.

I've seen news reports of people dying just to voice their opinion against you. I admire these efforts, and I have deep respect for the Libyans out there fighting to defend this freedom, as well as the freedom to decide for themselves what kind of government they want. You obviously have a strong backing still, as evidenced from the fact that the uprising has taken this long and yet you're still in power. I am not sure whether this uprising will succeed or not, but in the occasion that it does, you can count me in as one of the people around the world who will rejoice. 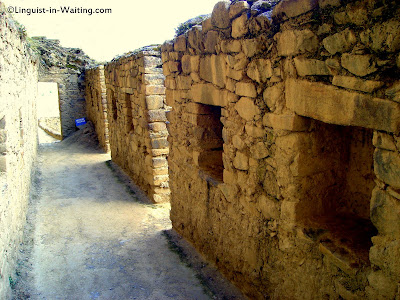 (Carved Windows, from my Ollantaytambo Series)