A few weeks ago, a friend of mine and I headed to Toronto, because I had another friend who was turning 30 and therefore was throwing a party. Our plan was to head there, and with a spare change of clothes, crash in their apartment overnight and head back to Buffalo the day after.

We left Buffalo around 3:00 PM, after stopping by a liquor store. After all, red wine should be there. Thus, we got a bottle of Argentinian Malbec. As we were crossing the Canadian border in Lewiston, New York, the first of our interesting adventures occurred. The border patrol (who happened to be a hot blonde girl in uniform) asked us what we were doing in Canada. I responded that we're attending a friend's party in Toronto. She asked then how did we meet this friend, to which I replied "Online." She responded, "Online?!?!?!" And her facial expression was priceless.

In my defense, that was the truth. I met Puku online: we've been blogging and have been reading each other's blogs for quite a while, before we finally met in person when he happened to be in Buffalo in September (?) 2009. After that, there's visits to Buffalo, visits to Toronto, meet-ups in Boston, meet-ups in Mexico City, among others. It's not your typical run-of-the-mill friendship. But it works.

So that was the interesting border incident. We arrived at the apartment around 6:00 PM, and there was still food to be prepared and cooked. So I ended up chopping bell peppers and mushrooms, and frying some marinated fish. Soon, the other guests showed up, and food was consumed. The lamb was quite spicy. There were plenty of leftovers left, and that turned out to be a good thing after all, later.

There was wine, I drank a few glasses of malbec and cabernet, but I avoided the pinot noir, since I felt it was a little too diluted and sour. There was also vodka but I didn't touch it.

The fun part was the people, actually. I suppose this is one big thing that I like about Canada, in that people come from all over the place. I came to Buffalo with a Japanese, and the party was hosted by my other two friends, who was Indian and Romanian. There were other Romanians in the room, but there were also other people, including a Russian who was very impressed when I surprised her with my knowledge of Ekaterinburg (she never thought that a Filipino would know about her hometown), a Ukrainian mathematician, a couple of people from Belarus, among others. The party ended around 2:00 AM.

That's when the other definition of fun happened. It involved erasure of memory, and having an intimate experience with the porcelain fixture in one's bathroom. Lesson learned: never ever mix red wine with vodka. Good thing I didn't touch the vodka the night before.

Anyway, we left the apartment around 11:00 AM, after packing some leftovers with us (including the chicken tandoori, which I haven't had the chance of sampling the night before). We expected to be back in Buffalo around 2:30 PM, but no, that didn't happen. There was an accident in the QEW, where a truck jack-knifed, and therefore the cars were all backed up. It ended up adding an additional three hours to the trip. We were stuck on the road, and the cars weren't moving at all. We ended up eating the leftovers in the car for lunch, and that was fun too.

In the end, the trip ended up around 5:00 PM and I arrived back to my apartment, safe and sound. There's always this nagging feeling at how awesome Toronto is (unlike New York City, I don't have a love-hate relationship with Toronto). It somehow added additional motivation for me to speed up and finish this dissertation as quick as possible, so that I can move out of this city and get a lifestyle upgrade. Oh well, that's life, interesting, in many different ways. 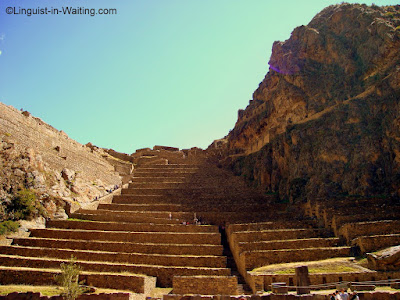 (The Steps to the Top, from my Ollantaytambo Series)