Well, first, the three were supposed to be executed in February, but President Aquino sent his Vice-President to China as an envoy, and the executions were delayed. However, the executions still happened, and all three were given lethal injections.

Given this scenario, it is quite interesting to see the reactions of the Filipino, from all branches of society. Reading comments in the news articles, for example the one I linked to above, makes me think and ponder about what the people think about this matter. And somehow I feel disturbed.

Second, whatever happened to self-determination? These people opted to be drug mules, and their poverty cannot be used as an excuse here. Is it natural to talk to strangers, and then this stranger will then ask you to take a package and deliver it to another person somewhere else? C'mon folks, it's 6,800 grams of heroin, that's double the weight of a newborn baby. It's quite a big package! Yes, there's the issue that you are poor, there's the issue that if you aren't caught (and that's a big IF) you'll get some cash, but it is still your responsibility to obey the laws of the country you're entering. And in the case of China, carrying such a package results in death. It is your responsibility to know that, and you cannot play the poverty or ignorance card and be scot-free.

Third, I find the metaphysical reactions to these quite bizarre. We find the group of Catholic god experts praying for miracles, and even some people left comments in the news that China should go to Hell. Seriously, people? Is praying the best you can do? If I were to die, if I were to be executed, I would definitely not like anyone to pray for me. If that is the best strategy these god experts have, then sorry but I find it pathetic. I find it pitiful that they think some mumbling of religious texts would result in a miracle that would potentially save these three people from execution.

The sad thing though, is that they have a belief that is infallible. The three people have been executed, and yet I am pretty sure they still believe in their god and that their god experts still have credibility. Assuming that prayer can indeed save lives, well, these three people weren't saved, right? Maybe they didn't pray hard enough? Maybe they prayed the wrong way? Maybe they mispronounced some mantra? Because obviously their prayer didn't work.

Oh well, life happens. Sometimes, life throws us lemons, and the best we can do is make lemonade out of it. As much as we want life to be orderly, there are times when things get chaotic and out of control. Perhaps the best thing we can do is to move forward and move on, and learn from the mistakes of the people that are involved so that we don't find ourselves in the same predicament. 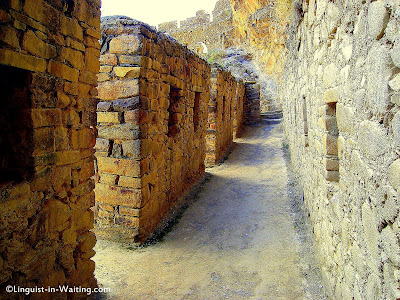 (Windows on the Trail, from my Ollantaytambo Series)